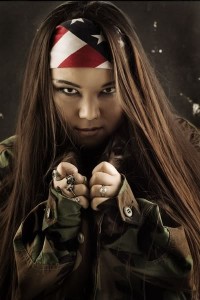 Bio: Bitch well here is another magi of the HRM it seems the sixth world just loves this group, I have no idea why I could really care less about witting about them. I am only doing so to give my readers a warning on who to stay the hell away from, so I am not going to give these bastards much of my time so hence the short write ups on them.
She is a hermetic magi who is a real bitch, she hails from Detroit and was part of an all girl biker club out there till she was recruited by John, she believed the propaganda and it wasn’t long before she was a full member killing off the elves in her city. John keeps her supplied with credits, gear and training and in return she does whatever he says without question.
Bitch has served the HRM Loyally and has killed more enemies of the HRM and she doesn’t care who dies, she believes strongly in the you have to break a few eggs to make an omelet. Bitch is not to be trifled with as she is very skilled in combat and magic though if your not an elf you might just be ignored by her. Just hope your not standing next to one when she is near or you might wind up killed just for being there. If you see Bitch contact SPD, FBI or Homeland immediately and leave the area. She is responsible for the slaughter at the piers during the street faire.

This is dedicated to all the warriors of the shadows who have fallen in the line of duty. RIP    Crazy Glue: Killed in the Jackals Lantern by an unknown assailant, Her Murder is still under investigation by SPD  Wallace: HRM member killed in the Scottish invasion of England. Rot in Hell Wallace  Tommy: Member of the Regulators recently killed by SPD    Grimm: Member and Leader of the now defunct Ministry, killed by SPD C-SWAT. During the Deaths Hand Invasion  Mr. Walter O'Neil (Sarge): Member of a group only referenced to as the Post Office, He was killed in … END_OF_DOCUMENT_TOKEN_TO_BE_REPLACED