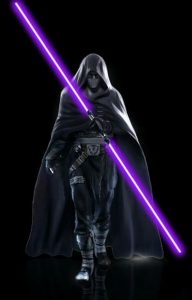 Bio: The one known simply as Darkness has descended onto the streets of Seattle and he is already making a huge impact within the shadow world; this man is a true enigma and nothing can be found about this street killer anywhere, even where he hails from. You would think someone with glowing plasma swords and extreme martial prowess would be remembered by someone, somewhere but nope. The only thing people remember is a small crest embroidered onto his robe of a crystal tear drop with some sort of Asian symbol within the crystal, this is it people thats all anyone remembers about Darkness and well his extreme martial prowess to dodge bullets, deflect bullets and even choke people from afar with just his raised hand. His twin blades always seem to change colour and he has even shown to have a second pair of these terrifying weapons and duel wield them with ease <see photo below> 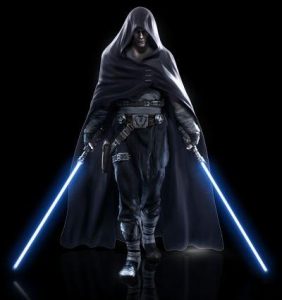 Darkness is an enigma and he seems to be fighting for the rebellion and helping Prince Grimm in Ireland when he is not performing acts of true evil here in Seattle. Rumours in Europe is that Darkness is the brother of Prince Sly Grimm, though I find that hard to believe seeing that he is under four feet tall and doesn’t show the typical signs of being a dwarf meta or normal dwarfism. This man is moves through the darkness with ease and can reappear behind you only to run his plasma sword through his target. He has also shown that he has the abilty to enlarge himself to a grand 5’3 so maybe his height is just an illusion adding to the mystery that is Darkness; well anyway anyone willingly working for the Grimm’s is someone not to be tangled with and add to this that through the years this man has only even been known as Darkness and he can bend the light around him so it will always he will always be eclipsed in darkness.

This is dedicated to all the warriors of the shadows who have fallen in the line of duty. RIP    Crazy Glue: Killed in the Jackals Lantern by an unknown assailant, Her Murder is still under investigation by SPD  Wallace: HRM member killed in the Scottish invasion of England. Rot in Hell Wallace  Tommy: Member of the Regulators recently killed by SPD    Grimm: Member and Leader of the now defunct Ministry, killed by SPD C-SWAT. During the Deaths Hand Invasion  Mr. Walter O'Neil (Sarge): Member of a group only referenced to as the Post Office, He was killed in … END_OF_DOCUMENT_TOKEN_TO_BE_REPLACED