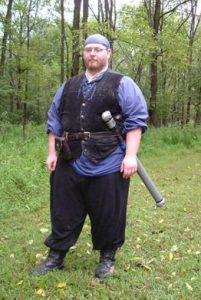 Here we have the newest dread doctor to hit the streets of Seattle.  It appears that Striker has been hiding more than his brother, but his son as well!  Though this man is far more than meets the eye – and apparently is better connected than most.  Get this – not only is he a Harbinger but a full fledged Horseman!!!  We know that the Horsemen have been recruiting their “next generation”, but the list has only been extremely accomplished runners and a few higher end rookies, all of whom seem to span the generational gap.  Notable Horsemen recent initiates include the Professor, the Rabbi, Striker, Bilbo, Law Dog, and others.  Within the mix is this man here.  Like the others we don’t know when he joined (one day we will get their records – just you wait), but we assume it was recent.  We only know about the above initiates thanks to their medical records and thanks to their tattoos being newer looking than those of Willhuff and Dover.  The fading always gives it away.

Now, you may be asking if the Horseman are using this as a diversion or if they are showing favoritism for a child (and could be the case in several of the recent recruits), and to that I would say not a chance!  Just talk to anyone who spends time on the Waterways base – this son of a bastard is considered almost as terrifying as Samael and Striker himself!  He is currently tied with Dr. Apples for third scariest – and he is a commander of the Sons of Odin Asgard division!  Do not be fooled – and that isn’t his only scary connection that should have you worried.

We have been able to remain in contact with Lord Huntington regarding this individual and it seems he, like his father, has been around for a long time.  In older days he used to go by the name Dray – no surprise that he has gone through multiple aliases.  Worse, according to the Lord, he was a ships captain!  Why is this important?  Do you have a dreking brain?!@#$%  Ship captain + Horseman = legendary pirate!!!  His dad served as the ship’s doctor for the Blue Claw, but since Dray here was a captain of his ship which one of their fleet was he?  Was he on the main ship?  Was he a cabin boy turned Captain?  Is there another big ship we didn’t know?  Too many questions to answer that make us concerned about this young man.

Now you might be thinking what else could there be?  Well, how about this – this man apparently just learned how to shoot at the range of the waterways base.  He clocked his hours and results into the system and one of our people were able to see the records – and they were atrocious.  Too bad to be faked.  This guy didn’t know how to fire a gun until a few months ago.  Now I get it, but stop and think for a moment.  He is a Horseman and didn’t know how to fire a gun – see the problem yet?  That means he must have another favored weapon.  My bet is the harpoon gun cause he almost certainly worked for the Wellerman!!!  This means he is close with Montgomery, and possibly in other order too.  He has been seen practicing his acrobatics and jumping so we assume he may even be a Crystal Dragon!  He has been seen as an appointed guard of numerous government officials which could also lend credence to him being within the President’s Men like all members of the Horsemen.  We haven’t seen his lightsaber yet, but that just means he is good at hiding it.  He could even be a Sentinel or a member of the 401st or 82nd given that he is a card carrying member of the Jamestown family – though what specialized division of that family doesn’t use guns remains unknown and is just coming to light now.  Hell, he may even be a part of the non-lightsaber wielding team within the President’s Men that we are beginning to uncover.  More on that later as information comes to light.

Unfortunately much of this is assumption and witness testimony, but the one thing we do know is that until a few months ago this man didn’t exist on the matrix, and now all of a sudden all his records exist as if they had always been.  This screams deep cover Horseman cover up and if they are going to this extent to keep him secret, you have to know that he must be exceedingly dangerous and beyond skilled in whatever combat it is he is trained in.  If you see him and you aren’t a patient, run to the hills.  If he is able to give commands to the newbies of the Horseman then you have to know he is at least more dangerous than some seriously horrifying people – and we don’t know where he fits in their roster.  Make sure to eat your apple a day because this is one of the many doctors you do not want to meet.

This is dedicated to all the warriors of the shadows who have fallen in the line of duty. RIP    Crazy Glue: Killed in the Jackals Lantern by an unknown assailant, Her Murder is still under investigation by SPD  Wallace: HRM member killed in the Scottish invasion of England. Rot in Hell Wallace  Tommy: Member of the Regulators recently killed by SPD    Grimm: Member and Leader of the now defunct Ministry, killed by SPD C-SWAT. During the Deaths Hand Invasion  Mr. Walter O'Neil (Sarge): Member of a group only referenced to as the Post Office, He was killed in … END_OF_DOCUMENT_TOKEN_TO_BE_REPLACED