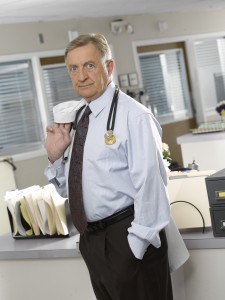 Bio: Samael as he is referred to is a perfect name for this monster, and I do say monster. This man has zero humanity and will do anything for some credits and I do mean anything. It’s seem that he is a perfect fit for the Death’s Hand. He fancies himself an Angel of Death and with a trail of bodies that runs all they way back to 2035 I would say he has lived up to his name. Samael appears to be a caring doctor and one who will help you in your time of need don’t let his grandfatherly appearance fool you. The only thing this monster wants to help you with, is a quick trip to the after life. He has been running the shadows since early 2040 but prior to that he worked for Doc Wagon as there chief of surgery until his termination do to death of to many high profile clients, dying on the operating table. This man has had his medical licence suspended twice already so be wary of back street clinics where he might be working. That simple surgery could very well be your last.
His work as a runner was mostly wet work and bringing tears to the enemies of corporations, he would slither in as an insurance doctor and a few days later his patient was dead from what appeared to be natural causes. He is the reason why Doc Wagon and other medical facilities have such high security that force the average citizen to seek out back street clinics. Since you need a yearly contract with the Wagon and a SIN for the hospitals, I know I have said in the prior posts about the embodiment of evil with Seven, Professor and the Dictator well Samael is rite up there with all of these men.
Since most of his work was straight murder it’s hard to find anything out about this man’s dealings in the shadows. Though I have recently found out that Seattle PD has cleared all the open cases involving Samael and considers them closed. This doesn’t seem right since if Samael was killed or captured it would be out there somewhere. I fear that Mayor Hill’s pardon program to fill Seattle PD’s ranks might have back fired here if he pardoned this monster. I have him listed as with the PD out of assumption and not fact. Though in time the truth will reveal its ugly head. I do feel bad for the families of Samael’s victim’s do they will never see justice served.
The only operation I know he was involved with was the Denver break out, where a group of runners back in 2040 busted into and then out of Denver to eliminate the North American delegates and ambassadors that where in peace talks at the Denver Summit. Samael, Seven, Ice Man, Professor, Skipper, Zero and the Misfit killed all in attendance and set peace talks back another 100 years. So honestly I have nothing good I can say about this man, and his comrades, and I will leave it with that.
Just a warning, don’t under estimate Samael, he is a physical adept and highly skilled in martial combat, with him being a doctor he is very knowledgeable in anatomy and can kill you with no more than a flick of his wrist. Remember a scalpel can be easily concealed in the palm of his hand. He is cold, calculating and unpredictable, this man is still killing toady and he would love to add your name to his list of victims so you have been warned.

This is dedicated to all the warriors of the shadows who have fallen in the line of duty. RIP    Crazy Glue: Killed in the Jackals Lantern by an unknown assailant, Her Murder is still under investigation by SPD  Wallace: HRM member killed in the Scottish invasion of England. Rot in Hell Wallace  Tommy: Member of the Regulators recently killed by SPD    Grimm: Member and Leader of the now defunct Ministry, killed by SPD C-SWAT. During the Deaths Hand Invasion  Mr. Walter O'Neil (Sarge): Member of a group only referenced to as the Post Office, He was killed in … END_OF_DOCUMENT_TOKEN_TO_BE_REPLACED