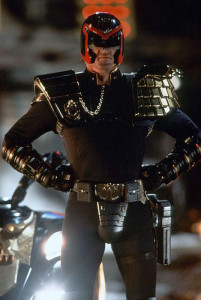 Weight: 250
Apparent Age: 50
Archetype: Street Samurai
Preferred Weapon: Twin Ruger Thunderbolts
Runner Song:
Bio:  Well this is a man who is not a shadowrunner in anyway shape or form, he is the LAW, Dread is the straight embodiment of the law and worked for Lone Star for his entire life till recently when he left the star to join SPD after Hill’s election. Dread is Judge, Jury and Executioner, this man only has one setting and that’s kill. When he was with the Star he was given free rain, to do as he pleases as the Star didn’t care and the paperwork was easier for a dead chrome boy then to send them to trial. Though now with SPD and they do care, so Dread has been shipped off to the low sectors and Barren’s to patrol the streets with no remorse. SPD could care less what he does out there, since as it’s been said, no-one who matters lives in those zones aka Voters and Tax Payers. If you are guilty of a crime and Dread is near, consider your self guilty in his eyes and your sentence is death. This man is barley human and a crack shot, Dread has been trained by C-SWAT and outfitted with the best chrome and hardware the Star and SPD can muster up If that’s not scary enough for you chummer, he has been given a license to kill and completely above the laws he is supposed to enforce. I have seen Dread blow a man away for jay walking and another was seriously wounded as a warning for failure to feed the parking meter. When the outraged families approached the Commissioner he just shrugged and said well they should have followed the law in Dreads beat. Dread’s hours are random though he is on the street 7 days a week 365 so you have now been warned. Don’t break the law on Dreads beat.

This is dedicated to all the warriors of the shadows who have fallen in the line of duty. RIP    Crazy Glue: Killed in the Jackals Lantern by an unknown assailant, Her Murder is still under investigation by SPD  Wallace: HRM member killed in the Scottish invasion of England. Rot in Hell Wallace  Tommy: Member of the Regulators recently killed by SPD    Grimm: Member and Leader of the now defunct Ministry, killed by SPD C-SWAT. During the Deaths Hand Invasion  Mr. Walter O'Neil (Sarge): Member of a group only referenced to as the Post Office, He was killed in … END_OF_DOCUMENT_TOKEN_TO_BE_REPLACED