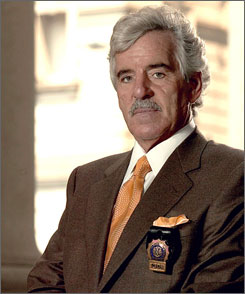 Bio:   Thorn is an old school detective from Los Angeles, and this runner turned full time police officer holds a sever grudge against those that he considers to be the enemy. Thorn earned his name by being a Thorn in the side of anyone who stood in his way, and this cop from the CFS holds serious discontent for the NAN and all its people. He was a rookie on the force when, the Ute Nation waged it’s failed war against the Provence of California and these natives didn’t take kindly to being defeated by the California State Guard and started a shadow war against Los Angeles and many of the other Southern California cities. many of Thorns friends and officers where killed during these early days and as well his two purple hearts were earned from the wounds he received from native forces.
Thorn at this point, decided that if his government or commanders wouldn’t do anything about the rising native threat, he would take matters into his own hands and enter the dark world of being a CFS shadowrunner and bring the fight directly to those that compromised the sanctity of the Free State. That’s exactly what he did, Thorn struck at Ute Nation compounds, embassy’s, and would strike at there neighbourhoods on the boarder. He as well joined forces with Fusion and truly became a force to be reckoned with. Though Thorn was also a police detective by day, so he had a major conflict of interests. Eventually Thorn was forced to choose between his loyalty to Fusion and the Cause or his badge, needless to say Thorn chose to keep fighting and was eventually run out of Los Angeles.
He arrived here in Seattle seeking work and seeking redemption from his prior bad acts, and thats how he found work within the fledgling SPD and became a officer within there ranks, being from the CFS shielded his prior crimes since the UCAS does’t recognize the CFS as a country and his crimes there where considered acts of war in a lawless land. So it seemed Thorn had found a way to shed his old skin and start a new life, what he didn’t foresee was the election of Mayor Hill, the sudden increase in native violence, the Deaths Hand invasion and the Mayors Pardon Program bringing some of the worst of the worst to the ranks of the SPD.
Thorn was once again forced to choose once again between the cause and his job, lucky for him the Mayor made that choice for him and Thorn can once again be a thorn in the side of the NAN. Thorn is a good cop, but he is like Brooklynn and profiles hard, if your are from the NAN or have native decent good luck against Thorn. Otherwise this man is one of the good guys, though now with the SPD versus the UCAS Military, Thorn will be a major player in this shadow war. His close friend Fusion is in the city and Thorn might soon become a Patriot like most of the SPD, So whatever side of the fight you stand on, this man will play a very important role.

This is dedicated to all the warriors of the shadows who have fallen in the line of duty. RIP    Crazy Glue: Killed in the Jackals Lantern by an unknown assailant, Her Murder is still under investigation by SPD  Wallace: HRM member killed in the Scottish invasion of England. Rot in Hell Wallace  Tommy: Member of the Regulators recently killed by SPD    Grimm: Member and Leader of the now defunct Ministry, killed by SPD C-SWAT. During the Deaths Hand Invasion  Mr. Walter O'Neil (Sarge): Member of a group only referenced to as the Post Office, He was killed in … END_OF_DOCUMENT_TOKEN_TO_BE_REPLACED