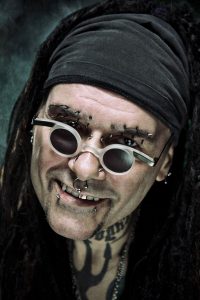 Bio: Tunnel well where to start with yet another Railroad Agent of terror, these men are nothing but killers for hire hiding within the Common Wealth to avoid prosecution for their crimes against the UCAS. They call him Tunnel for his tactics of using trench warfare and digging under the UCAS military bases to kill everyone and abscond with important data unseen. This man is a true coward and attacks from places unseen or as General Deacon Kirby says “Travel Roads Less Travelled.”

This needs to stop, we have had to steal the information from Director Mitchell’s hard drives before he destroyed the evidence as it has been discovered that he has been a traitor this entire time and spoon feeding the Railroad with all the intelligence they needed to help destroy the UCAS. We will not rest till the entire Railroad and the Harbingers Militia Unit meets its maker on the gallows and this as well means all rebels within the illegal entity of the Common Wealth.

Tunnel claims to be a Recovery Specialist….what in all thats holy does that mean!! They recover nothing and only deliver sorrow, broken hearts and tears, these men murder, steal, spy, assassinate, and kidnap in the name of freedom. Hell General Kirby says all the time “Libertas Omnium.” which translates to Freedom of Death…I told you the Railroad just forces their will onto everyone and they have know been exposed as the killers of General Davidson and many of those loyal and dedicated UCAS officials….all Kirby did was smirk at the death of the innocent lives.

The Harbingers are nothing more than a cover set in place by General Ralph Rivers; they are the strong arm of the Rough Riders and the Special Forces Tactile Response Unit using many special teams to conquer the Western Seaboard. General Ralph Rivers is the true Mastermind of the Rebellion and he has his patsy Colonial to thank for taking the heat round…..well that cover has been blown and we all know the truth thanks to General Eric Cunning of the UCAS Joint Military Division. He has corrected the false information and placed Ralph Rivers as Number One Most Wanted in the Known World, this raciest warmonger even outclassed President Edward Davis for the first time in more than forty years….all is correct in this world.

The Harbingers are so influential that they got the killer of the south Hound to hunt the true reporters like the rats he thinks we are…..Hey Hound stop, My Alpo payments are up to date, also I have a doggy treat for you and DiCane good dogs do as your told. Ralph is so mean and cruel that he even quelled a shifter and has everyone under him controlled through terror and intimidation. Tunnel is just another example of the people he has on his payroll and someone that can remove any potential threat before it becomes a problem.

The Forsaken have unleashed Atari to play Mortal Combat with us, the Wolf Pack has Misfit the Fiend himself on the prowl with Digger trying to bury our people alive, Tesla needs to stop drinking so we are not concerned about him anyways the Banker has him tied up, Edison is worthless, Short Circuit is just a child trying to play with adults….Go Back to School, the Railroad have no Deckers, Dump Shock is to concerned with his Bourbon Chicken to be a threat and Switch Doctor well that out of date hack is nothing but rusted nuts and bolts…the True Demure are hear to stay.

Tunnel we will not stop speaking the truth till you are eventually executed like the rest of your terrorist friends, you cant murder legal UCAS citizens and not expect to be punished. This rebellion is illegal and every death rests on the head of Supreme General Ralph Rivers and the Harbingers the true warmongers of the world. Even our former boss the Demurest has failed to expose this treachery, yet he choices to ignore the truth and hide like the wounded dog he is, he quotes Mr. Boston as a inspiration and that alone should be proof that he has always been a traitor. Mr. Boston is a liar and his reports are nothing but scripts prepared for him by Ralph Rivers.

Page Written By: The True Demure….Just Bring It Puppy!!

This is dedicated to all the warriors of the shadows who have fallen in the line of duty. RIP    Crazy Glue: Killed in the Jackals Lantern by an unknown assailant, Her Murder is still under investigation by SPD  Wallace: HRM member killed in the Scottish invasion of England. Rot in Hell Wallace  Tommy: Member of the Regulators recently killed by SPD    Grimm: Member and Leader of the now defunct Ministry, killed by SPD C-SWAT. During the Deaths Hand Invasion  Mr. Walter O'Neil (Sarge): Member of a group only referenced to as the Post Office, He was killed in … END_OF_DOCUMENT_TOKEN_TO_BE_REPLACED