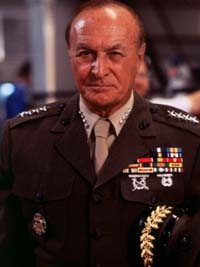 Bio: Where to start on this man. Well first off he is one of the most powerful men in our working government and from one of the most influential families the UCAS has ever seen. This man is old money and he has turned that old world money into multi-millions, and that is under shadowing his actual vast wealth. If James ever worked the shadows is unknown. His handle of Ghost could just be a military code name, so I will report on what I do know about James. He is a military man through and through. He has served the UCAS Marine Corps since his eighteenth birthday and we assume he is in his 60’s now, but that could be very off.  As James’s birth records went missing many years ago and his service record is so classified that maybe one day it will be released to the public but till that day well we will never know the truth.
James is an electronic warfare specialist, though he is as well cross trained within the Green Beret’s, Force Recon, Army Rangers, and Navy Seals. This solider is nothing to take for granted as he might be a marine, but he has been trained by multiple special forces groups. He can handle himself in the field as well as in the political arena. James is the founder of the Urban Strike Division in which he personally funded the recruitment and equipping of some of the worst dirt bags the country has ever seen and whipped these runners into shape to form the best team the UCAS has ever seen. Urban Strike Division One is the last line of defense we have against a foreign invasion and threat to our way of life. They have thwarted many a terrorist strike, and probably will continue to do so long after James has passed on. This is truly his legacy and The people of the UCAS are thankful for it.
James has had some shadier dealings through his time in the service, and with his families control. He is the man who is in control of every single Satellite Orbital Laser the UCAS has in their arsenal and has no qualms about using them to end a threat, even if that means civilian casualties. It just furthers his political agenda. He began what is known as the Runner Rehabilitation Program which instead of jail time, the runner would be brain danced and pressed into service for an extended period of time, this program is still in affect today. He was the spokesman to push through the Man versus Machine Law that many of the originals helped create a need for, but the real problem child for this was Nemesis 1.0 and the problems this cyborg created. James used his political connections and vast wealth to push this law through congress so he could target Nemesis 1.0 with the SOL system and unleash hell fire from the sky down upon this enemy. Prior to the MVM law this would have been considered a breach of the Geneva convention. Now he has full legal authority to unleash this system upon any target in violation. He has mastered the targeting of this laser to hit a single target or an entire city block or more, you have been warned.
James’s money goes even deeper than our own congress as he has his hands deep and I mean deep in Aries pocket as they are in his as well, any enemy of Aries is an enemy of James and that means he can unleash a full military strike at any time. Remember, he commands black opp teams and I do mean teams. He is the General in charge of all special forces divisions. Yes, that means he commands the Navy, Army, Air Force, and Marine special forces groups. This was granted to him through congress when we were under threat of a Russian invasion. James has sway over the President do to him sitting on the Joint Chiefs of Staff as the head.  He as well is the Chairman of the board for Aries and Bio Tech, don’t think just cause he is more politician and commander he has let his skills laps in combat, because you are dead wrong. He regularly goes out into the field with US1 and trains heavily with them still. If you ever hear through a radio “Just give me two fucking minutes!” or the words “Target acquired, Firing in 3,2,1” you might just be screwed as the hell fire will be unleashed.
This man is very dangerous and not someone you want to cross, he will use the full weight of his position’s to crush you like a bug. There is a reason he still lives and many assassins don’t. This man can end a war with a single phone call. Crossing James or his family is just not something you want to do if you value a long and healthy life. Just don’t do it!

This is dedicated to all the warriors of the shadows who have fallen in the line of duty. RIP    Crazy Glue: Killed in the Jackals Lantern by an unknown assailant, Her Murder is still under investigation by SPD  Wallace: HRM member killed in the Scottish invasion of England. Rot in Hell Wallace  Tommy: Member of the Regulators recently killed by SPD    Grimm: Member and Leader of the now defunct Ministry, killed by SPD C-SWAT. During the Deaths Hand Invasion  Mr. Walter O'Neil (Sarge): Member of a group only referenced to as the Post Office, He was killed in … END_OF_DOCUMENT_TOKEN_TO_BE_REPLACED