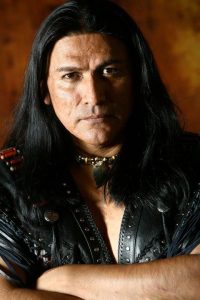 Bio: Well where to start with the nightmare known as Apache, well first off this Native is the son of the dreaded Mayor and part of the Outlaws Five; well thats just the start for this traitor of his people Ilesh Gunner, this man also commanded the nefarious Apache Renegades and went to war against his own people in the early part of this century till the Renegades where brought to justice by General James O’Brian on September 15th 2050. Only Apache and three others would escape capture and remain at large till now. Thanks to this traitor joining the US Elite he will be quickly apprehended and hanged properly by the remaining UCAS Loyalists and the Tribal Nations.

Ilesh here is the real deal and one mean bastard, he holds all the credentials of a rebel and has been welcomed into many of their orders, he as well shares his tribal secrets with the members of his family and his ancient Apache fighting style. This man has betrayed his own people and lead many attack against them throughout the years. Hell he even married known raciest Houston Dumont’s daughter thus proving he is nothing more than a traitor to his people; Ilesh is part of the Presidents Men, Brotherhood of Mercenaries Sons of Odin Division, Rough Riders, Sons of Liberty, Bounty Hunters and Jamestown Clan so seriously what more do you need to know about this killer ad terrorist.

He commanded the Apache Renegades, served with the Navajo Ghost Warriors and fought alongside the 401st from 2001 till 2015 when he would retire to begin the Renegades. He as well took part in the South West Uprising and fought alongside the Texans, New Mexican, and Arizonians that where bringing unlawful war to the peaceful tribal folks. He served with the Cajun Cavalry and the 501st Cajun Cavalry where he would learn the secrets of the Bayou in exchange for secrets of the tribes. Ilesh is as well the one responsible for the wholesale slaughter of his own people when they ignored the law and attacked a judicial execution and spared the life of Adolf Gunner from the gallows; to bad they weren’t a few seconds later, I saw the videos they already had Adolf swinging.

If there has been a revolt or an uprising Ilesh has been involved and he has led the charge, killing everyone in his path and scalping native and white man alike, this native is pure evil and does truly fit within the family that he was born into. All Gunners are callous killers and hunters of the innocent, they thrive in creating grief and spilling blood; just look at the Gunner Brothers or Brian Kindler for an example. Apache is one of the Jamestowns go to men and that means killing and it is something he is damned good at, he is as well on General Oliver’s short list for the Bounty Hunters Guild and normally partners up with his father in law….nothing good can come when the Rattlesnake and Apache are on the hunt, legend states that once those two are on the trail the target is already caught and they just don’t know it.

Apache is very lethal and dangerous just like his father and if we could actually get enough data to register him, we would place him within the registry of lethality though for now he remains a mystery on that account. He is a gunslinger adept trained by the king of the pistol….his father, he has been trained in hunting by his uncle and not to mention his own people. This man is the reason the Outlaws Five where welcomed onto the tribal lands and treated as an equal, so his corruption goes deeper than originally thought.

Yes Apache is old, he is as old as dirt just like good old pop and he hasn’t ever calmed down and he hasn’t once asked for forgiveness for his sins. He has only upped the ante and united the Gunners with the Dumonts bringing another evil family into the flock and keeping the fires of hate burning bright into the night. This man was welcomed into the Texas Elite and has stood as a road block for many a year against his own people, rumours state that Ilesh is the reason for Anthony DiCane becoming a shaman and a racist bastard like the rest of Texas. Tony’s own father tried to keep Ilesh and Houston away from his son and well that seemed to work till Michael was killed and now reports indicate Tony is being corrupted once again by Ilesh and Houston.

We can thank Max Yates for putting them together, well it seems that Bilbo is no better than his raciest father and deserves to hang just the same. The only good thing is all these bastards are broken and suffer war injures, that means they are easy kills and for Tudor Yates focus your attacks on hi………………………………………..I Don’t Think So!! You have just forfeited your life, game set match…………Dumped and Burned

This is dedicated to all the warriors of the shadows who have fallen in the line of duty. RIP    Crazy Glue: Killed in the Jackals Lantern by an unknown assailant, Her Murder is still under investigation by SPD  Wallace: HRM member killed in the Scottish invasion of England. Rot in Hell Wallace  Tommy: Member of the Regulators recently killed by SPD    Grimm: Member and Leader of the now defunct Ministry, killed by SPD C-SWAT. During the Deaths Hand Invasion  Mr. Walter O'Neil (Sarge): Member of a group only referenced to as the Post Office, He was killed in … END_OF_DOCUMENT_TOKEN_TO_BE_REPLACED