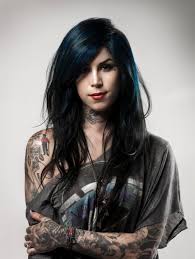 Bio: The daughter of the Gargoyle, well that’s some scary shit right there; I would hate to be any of her boyfriends that she brings home to meet daddy. They might not make it out the front door if they don’t answer the proper Dad 20 questions and remember Gargoyle is also a cop so he knows how to interrogate and if thats not bad enough he has his Wolf Pack buddies to back him up. Though all kidding aside City is one serious bad ass bitch and one you never want to be in the way of when she is on the job; City will just cut you into kibble and keep moving she doesn’t care as she inherited her fathers callous and calculating nature, doesn’t help that she has been trained since she could crawl in the way of the Crystal Dragons and by many within the Wolf Pack and Forsaken not to mention their close friends in the Old Guard.

Jet is allot like Kingsbury’s daughter Liberty in that she wasn’t given the choice of not being part of the shadow world and her father would make damned certain that his little princess wouldn’t meet the same fate as his wife and Jet’s mother. Even while travelling the world and hunting down criminal empires he always had time for his little princess and would appear to all those around as the perfect father raising his daughter alone in this deadly world; little did people know that he was making certain she was well protected and receiving a proper education and the most tiresome training regime for anyone to be put through, I guess that’s why Jet is the way she is today.

Unlike other old timers that raised their daughters like men, and would not accept that they actually had a daughter (Yes Digger, I am talking to you) the Gargoyle was proud to have a daughter and he would do anything to keep her safe and happy. She might have had a rough childhood with moving around allot and being prepared for the initiation into to two separate orders; she would still go off to prom, graduate high school and have a seemingly normal life but behind the scenes she was working within the shadows alongside her father and his friends. Pack leader Stamps is the one that dubbed her City, when one evening before an operation he put his hand on her shoulder and pointed to the gleaming big city lights and said “One day Jet, this City will be yours to rule….and that day starts today City.”

She is also known as sin and you can just guess why, this girl has done it all and hasn’t lost a nights sleep as she is one the fast track to being a legend among legends and he loyalties lye deep within the Wolf Pack and Crystal Dragons and her father is her hero and idol; this is one father daughter relationship I would not want to get in the way off as Gargoyle is one step from being a god among men, his little princess is a legend in her own right and is beloved by the entire Wolf Pack and nobody and I mean nobody hurts a wolf cub and doesn’t expect the Pack to come at you tooth and nail and especially with a Mamma Wolf like Medusa.

This is dedicated to all the warriors of the shadows who have fallen in the line of duty. RIP    Crazy Glue: Killed in the Jackals Lantern by an unknown assailant, Her Murder is still under investigation by SPD  Wallace: HRM member killed in the Scottish invasion of England. Rot in Hell Wallace  Tommy: Member of the Regulators recently killed by SPD    Grimm: Member and Leader of the now defunct Ministry, killed by SPD C-SWAT. During the Deaths Hand Invasion  Mr. Walter O'Neil (Sarge): Member of a group only referenced to as the Post Office, He was killed in … END_OF_DOCUMENT_TOKEN_TO_BE_REPLACED