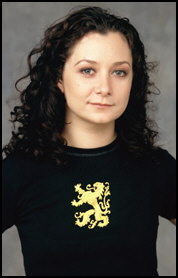 Weight: 135
Apparent Age: 16
Archetype: Heretic Magi: Circle: 12
Preferred Weapon: Katana
Runner Song:
Bio: Well one name rings loud and clear when you are talking about the terror that beholds the Lynnwood district of Seattle. I am speaking about the teenage witch known as the Night Queen and this youngster is the real deal, when it comes to vicious killers and powerful magical threats. The Night Queen is the daughter of Roy Krieghoff and her fathers violent leg breaking nature was directly inherited by the Night Queen and this youngster has a serious wicked side and one day will become one of the most terror inducing magi of her generation, thats if the Night Queen survives to her adulthood.
Being a Krieghoff means that you are born into a dynasty and expected to excel and further the progression of the families business and agenda, for the Night Queen she took this to be controlling the streets and keeping everyone in-line when it comes to dealing with unhappy store clerks and rival gangs and families. The Night Queen as well does a wonderful job of maintaining the Krieghoff law and order on the streets and keeping rogue runners and other nefarious agents from being able to stack a claim with her territory. Not many people are brave enough to face a young magi that has the ability to hurl mana blasts and mana bolts that are so powerful that they become physical. The Night Queen has also created some unique and specialised spells that focus around darkness and controlling and animating the shadows. She is also a very skilled conjurer and is always flanked by a few not so friendly elementals and her ally spirit. She has taken to her teaching like a moth to flame and she has full accepted and adapted her life to the family business.
The Night Queen has been indoctrinated from birth to hate the UCAS like the rest of her family, and she has no issue with striking at the heart of the UCAS and it’s citizens. The Night Queen uses terror tactics to force people to retract their UCAS citizenship and accept the citizenship offered by the Freedom Patriots. Those that slam the door on the Night Queen suffer greatly, she will normally just target them with magical trickery and simple assaults, though if angered he will torch homes with her specialized fireball spell and even go as far as to torch entire blocks with hell blast. Only submitting when the subjects relent and accept her offer of proper citizenship.
The Night Queen is a true master of the night and she rules the Lynnwood district with an iron fist and even the local police department will ignore her out of both rear and respect of such a young master. The Night Queen has also taken direction from the young runner Toad, this being all the advice she would need to become even more successful within the shadows. The Night Queen is highly sought out for her skills as a magi and her skills in combat. Though this young magi has only one desire and that is to meet and and be taught by the master himself, she looks up to the antics of the infamous magi known as the Ringmaster and she hopes one day to be just like her idol.
Though for now she will continue to further her family’s agenda and serve the cause with every ounce of her being, between the items that her cousin Salamander creates and the unlimited supply from her Uncle Tang, the Night Queen is well outfitted and never in need of any supplies, fetishes, spell formulas and foci. She is still receiving magical tutelage from and unknown magi of extreme power and one can only assume that her tutor is the infamous Shyster seeing the family’s connection to the Brothers Grimm. Though this magi tutor could be anyone, it would only make sense that it would be the Shyster.
The Night Queen is on the streets and she holds her turf with an iron fist so be very careful when travelling through the Lynnwood district and whatever you do, don’t anger the Night Queen for you don’t want to feel the fiery wrath of her temper. She is truly her fathers daughter and Lilith is full of anger and violence, she has already killed and she will not give a damn if she collects more sin in the name of the Krieghoffs, so again if her blood begins to boil, she will not hesitate to make yours boil as well you have been warned.
Page Written By: Shadow Writer

This is dedicated to all the warriors of the shadows who have fallen in the line of duty. RIP    Crazy Glue: Killed in the Jackals Lantern by an unknown assailant, Her Murder is still under investigation by SPD  Wallace: HRM member killed in the Scottish invasion of England. Rot in Hell Wallace  Tommy: Member of the Regulators recently killed by SPD    Grimm: Member and Leader of the now defunct Ministry, killed by SPD C-SWAT. During the Deaths Hand Invasion  Mr. Walter O'Neil (Sarge): Member of a group only referenced to as the Post Office, He was killed in … END_OF_DOCUMENT_TOKEN_TO_BE_REPLACED