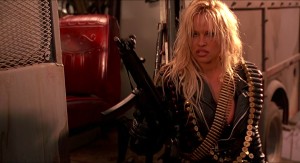 Weight: 165
Apparent Age: 28
Archetype: Street Samurai
Preferred Weapon: Ingram Smartgun
Runner Song:
Bio: Now when it come to the Huntress we are talking about one mean bitch, this runner is all attitude all the time and she has the skills to back up her attitude. This is yet another of the new breed generation to emerge on the streets within the last few years and recently do to the war in the inner city she made a name for herself. The Huntress was born and raised in the Bowery district and living in this tough neighbourhood she was forced at a very young age to fend for herself and fight for what she wanted. The Huntress became a street hunter to survive and eventually graduated to full fledge street samurai.
She has fully adapted to the new lifestyle and has zero care or concern for anyone other then herself and this makes the Huntress completely unpredictable, though there is always one certainty bullets will be flying and she will be kicking someone’s ass before the end of the night. The Huntress is totally unprofessional and at times reckless so be very careful when dealing with this wild card. She has taken to being a true samurai to heart and follows the workings of the masters of the craft.
The Huntress has done a handful of jobs and was involved in the fight for the Bowery against the military, this bitch held her own for many hours before being forced to retreat do to injuries and lack of ammunition, though this didn’t stop her from bashing in soldiers skulls with anything she could find. If there is one samurai to watch from this generation it’s the Huntress, she might just be the Medusa and Ash of this younger generation and have her name permanently carved in the history books as the most bad ass female street samurai of the new breed generation.
Page Written By: Shadow Writer

This is dedicated to all the warriors of the shadows who have fallen in the line of duty. RIP    Crazy Glue: Killed in the Jackals Lantern by an unknown assailant, Her Murder is still under investigation by SPD  Wallace: HRM member killed in the Scottish invasion of England. Rot in Hell Wallace  Tommy: Member of the Regulators recently killed by SPD    Grimm: Member and Leader of the now defunct Ministry, killed by SPD C-SWAT. During the Deaths Hand Invasion  Mr. Walter O'Neil (Sarge): Member of a group only referenced to as the Post Office, He was killed in … END_OF_DOCUMENT_TOKEN_TO_BE_REPLACED