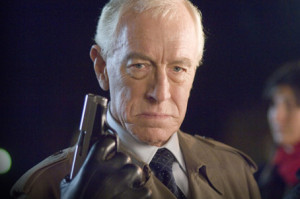 Weight: 180
Apparent Age: 60
Archetype: Street Samurai
Preferred Weapon: Colt Manhunter
Runner Song:
Bio: Baron well this runner hails out of Boston and well you can see where this is going, Yup he is one of those blasted Patriots. Baron has been running the Boston Shadows since the early part of the 2040’s and has sent many an opponent to an early grave. The Baron is nothing more than a contract killer and will take any contract put before him. Though he won’t take a contract out on Omega, I wonder why. This man is a monster in combat like most samurai are. don’t think he is anything like a Seattle runner, this man cares little for publicity and the fans that come from it. He is what we would call a real samurai and not a poser, his cyber is legit, his gear is top of the line and his skills are spot on. I have seen footage of Baron taking a rail gun shot the chest and he kept moving. Since Baron has sent many of my fellow reporters to the grave, for even mentioning his name, I will stop here. If you want to read more about the Baron it can be found in the shadow matrix, or on Shadow Beat.

This is dedicated to all the warriors of the shadows who have fallen in the line of duty. RIP    Crazy Glue: Killed in the Jackals Lantern by an unknown assailant, Her Murder is still under investigation by SPD  Wallace: HRM member killed in the Scottish invasion of England. Rot in Hell Wallace  Tommy: Member of the Regulators recently killed by SPD    Grimm: Member and Leader of the now defunct Ministry, killed by SPD C-SWAT. During the Deaths Hand Invasion  Mr. Walter O'Neil (Sarge): Member of a group only referenced to as the Post Office, He was killed in … END_OF_DOCUMENT_TOKEN_TO_BE_REPLACED