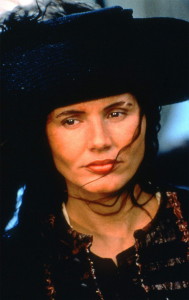 Weight: 155
Apparent Age: 40
Archetype: Physical Adept: Circle: Unknown
Preferred Weapon: Cutlass
Runner Song:
Bio: Well if you think only the Crimson Bloods allowed women into their ranks you would be wrong. Long gone are the superstitions of women being unlucky to bring aboard ships and now it’s just as common to find a women aboard a pirate vessel as it is a man. This being said the women in the world of the pirates has to work twice as hard to prove her worth then any of her male counterparts so running into a female pirate could be a serious threat to anyone who dares to cross them. Coral is just that women, she is just as deadly as her fellow crew and officers and has been personally trained by the Barracuda, Saw, Taps and even the Admiral himself has had a hand in grooming Coral into becoming one of the most fierce pirates and warriors the seas have ever seen. Coral is always trying to up the ante and prove herself to be even better then some of the older Wolves she works with. Coral’s brutality and no surrender attitude has even garnered her the right to become the wife of the Admiral as he was impressed with her can do attitude and when he asked for her hand Coral would have been stupid to refuse, also one doesn’t simply refuse a Pirate Admiral when they ask for your hand in marriage. This Coral knew and she also knew that being his wife, would only mean she would have to always prove her worth to the men or she would loose all the respect she worked so hard to earn.
Coral on a number of occasions has proven that she is more then a handful to any male and when she descends onto a enemies deck, the fear trembles them down to their very souls and most would rather dive head first into shark infested waters then be on the receiving end of Coral’s blade. This women earned her name do to the beauty of the coral reef, though as any sailor knows the reefs hide a very deadly side and are as hard as stone and as sharp as a razor. This Coral has proven time and time again, her skills in combat are beyond deadly and she is not shy about drawing her sword or gun to prove a point. Coral is like the rest of the Wolves their souls long sold and nothing but the soulless eyes of a predator, the Sea Wolves have fully accepted Coral as one of their own and she has become the wife of Admiral Robbins this should be all the proof anyone would need that this is one women you do not tangle with.
She works many jobs on the Lycanthrope though her primary position is the quartermaster and she is in charge of all the munitions, cargo and basically anything that is stored and or brought onto the ship. She is also the chief gunner when the Wolves are engaged in sea battle before any boarding occurs, though once the hooks are launched and the boarding is to begin, Coral is more then content to join the fray and enter the targets ship. Once she has stepped foot on the target vessel this is where Coral really shines, though what she does is brutal and she doesn’t care who she needs to cut down, as long as blood flows and the sharks are feed.
So with this women she has more then proven to be a serious combatant, and as I said prior more then one man would rather dive into shark infested waters then face Coral head on. She also is more then able to tear hatches open bare handed and cut through the hull with her blade so don’t think armour will spare you against her. The pirates have learned how to deal with barriers, and heavy armour plating as they deal with these obstacles daily. They also might appear to be lightly armoured and they are as heavy armour and the sea is a bad combination, but their light armour is as sturdy as any heavy military grade armour or better so don’t think the standard firearms will have any affect against these roughens.
Coral like any pirate has the attitude of what’s mine is mine and what’s yours is mine, so if she something that catches her fancy she will kill to get if needed. She never accepts surrender unless she is asked to bring a present for Saw to play with and put on a show for the crew, and she will always fight with her full ability Coral never pulls any punches so best for to not hold back when engaged against Coral.
Page Written By: Shadow Writer

This is dedicated to all the warriors of the shadows who have fallen in the line of duty. RIP    Crazy Glue: Killed in the Jackals Lantern by an unknown assailant, Her Murder is still under investigation by SPD  Wallace: HRM member killed in the Scottish invasion of England. Rot in Hell Wallace  Tommy: Member of the Regulators recently killed by SPD    Grimm: Member and Leader of the now defunct Ministry, killed by SPD C-SWAT. During the Deaths Hand Invasion  Mr. Walter O'Neil (Sarge): Member of a group only referenced to as the Post Office, He was killed in … END_OF_DOCUMENT_TOKEN_TO_BE_REPLACED