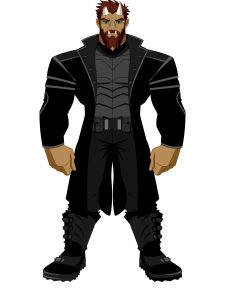 Bio: Thanks for getting me in here Edison, I wanted to make sure to take care of this before the blasted Deckers (present company excluded) got to my buddy here.  Hey all of ya this is Little John from the Tribe watching out for my buddy Pylon.  He is an interesting bugger.  Honestly, if you need a bio for him just listen to his song, its surprisingly accurate!  But enough aboot that (just joshing buddy).  I’m sure someone else will give ya a better bio, but until then you are stuck with me.  I don’t have any letters next to my name like some people, so my college degree will have to do.  I guess we get to see whether or not West Point has a decent writing program.

Pylon hails from upstate UCAS and came on down here to get away from his old occupation.  To say the least, something bad went down.  Without going into too much detail he stopped a serial killer, but got that scar you see on his left eye for his trouble (along with some serious mental damage, and I’m not talking about the horn).  He sustained a number of injuries requiring cyber and decided that man and machine law is easier to deal with here in Seattle (which, to be fair, it is since it doesn’t exist).  Like most trolls, he can’t rely on his biological family for anything, so now he has found a brotherhood.

Sadly for this poor guy he would end up on the hoser end of things for a bit after an operation that went horizontal.  He got nailed by a Black Dragon being on his team and keeping it secret, which is where his passion for their removal comes from.  This member screwed the pooch you see and while all the squishy breeders all died, Pylon and his trollish constitution (what we are known for after all) survived the blast that was the Gargoyle raining on the Dragon’s parade and went into hiding.  Fast forward around a year and this is what we have.

I will say, there are some legends out there that are hogwash, but this one is definitely legit.  Advice on behalf of my friend, DO NOT SHOOT CLIPS TOWARD TNT WITH A HOCKEY STICK!  Though how that happened and the fallout from it is a whole other story that’ll cost you some beer and wings.  If you do come by to hear, don’t forget my commission as this information man, I like them wings spicy.

Congrats on making it out alive buddy and welcome to the Tribe!  Ugh, I have a lot more to say, but I’m making my passenger nervous by texting while driving.  Gotta go, only 40 more hours till I’m down south, catch you in a month!  Tell Robin I said hey!

This is dedicated to all the warriors of the shadows who have fallen in the line of duty. RIP    Crazy Glue: Killed in the Jackals Lantern by an unknown assailant, Her Murder is still under investigation by SPD  Wallace: HRM member killed in the Scottish invasion of England. Rot in Hell Wallace  Tommy: Member of the Regulators recently killed by SPD    Grimm: Member and Leader of the now defunct Ministry, killed by SPD C-SWAT. During the Deaths Hand Invasion  Mr. Walter O'Neil (Sarge): Member of a group only referenced to as the Post Office, He was killed in … END_OF_DOCUMENT_TOKEN_TO_BE_REPLACED