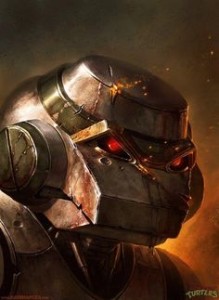 Weight: ???
Apparent Age: ???
Archetype: Street Samurai
Preferred Weapon: Sai
Runner Song:
Bio: Raph is more of an urban legend then anything else, this reporter ha never seen him nor can find any actual verifiable information on this runner. So I will report on some of the rumours that have been spread by the wage slaves in the low district. Raph is rumoured to be a cyber zombie (Borg) that has completely gone insane, his modifications have transformed his outer core into that of a ninja turtle from the old 20th century comic books and movies. He also believes he is a Ninja Turtle and has chosen to live in the sewers of that district.
Raph claim’s to be the champion of good and he helps others by fighting off crime like a vigilante of the past. Some pizza delivery folks, have reported strange sightings when they would deliver to sewer grates and manholes. SPD is on the look out for this cyber zombie for violation of the man or machine law, but the locals never say anything about him as he is there savoir. Well if Raph actually exists is a mystery and shadow beat will pay 10,000 credits for verifiable information on the existence of Raph.

This is dedicated to all the warriors of the shadows who have fallen in the line of duty. RIP    Crazy Glue: Killed in the Jackals Lantern by an unknown assailant, Her Murder is still under investigation by SPD  Wallace: HRM member killed in the Scottish invasion of England. Rot in Hell Wallace  Tommy: Member of the Regulators recently killed by SPD    Grimm: Member and Leader of the now defunct Ministry, killed by SPD C-SWAT. During the Deaths Hand Invasion  Mr. Walter O'Neil (Sarge): Member of a group only referenced to as the Post Office, He was killed in … END_OF_DOCUMENT_TOKEN_TO_BE_REPLACED