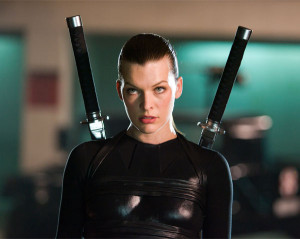 Bio: Well someone joking around asked what would a child of the Diggers be like, well the answer is the soulless killer known as Blade. This hunter of the streets has pure evil coursing through her blood and this evil has fully directed her life as a runner. Blade has tried to live up to the legacy she was born into and hasn’t cared once about living a normal life like her mother wanted for her. Having a father like Digger means that the police are always luring near and her father was basically never home, though he did give her one gift that she has carried with her and that being his mystical nature of being a adept and his legacy. For Blade she wanted to keep her fathers legacy alive, but she didn’t have the stomach to bury alive and torture the victims like he did.

For Blade she became a killer for hirer and remove her targets lives by shotgun or sword sparing them the suffering of being buried alive. she believed in giving them a quick death and not dragging it out like her father would. For Blades victims I believe they are thankful and for their families they are allowed to have a funeral and burial and receive closer, instead of forever living with the “What If?” and not knowing. Once Blade took to the streets there was no turning back and she dove in head first, this became her battle cry as she took whatever job would come her way and she never left anyone alive.
Blades preferred targets are domestic abusers and those that exploit the week, this adept will not tolerate the exploitation off women and she is one for equal rights and to be treated like one of the guys. With Blade talking down to her, or treating her like one of the girls will only end with a bloody nose or worse remember she is the Diggers child and this means she has his temper like father like daughter. Blade emerged on the streets in 2058 and has not taken a break since, all Blade has done was change scenery and move to a new city from time to time. She even entered Bug City for a few years to do some bug slaying, though as Blade put it “To Hell with Bug City!” she doesn’t know how Stamps and other hive busters managed to stay sane ad alive for all these years dealing with the bugs.
Blade is back in Seattle after swearing off Bug City and has returned to her old habits, this killer is fighting on the side of the city and will fight to defend her citizens from the evils of the UCAS. For Blade know understands the ramblings of her old man and why he cursed the false flag. Blade is totally freelance and does whatever she needs to do for the sake of justice for those that need protection. Blade might the daughter of evil but she has mellowed as she has gotten older and has become more focused, Blade considers herself to be one of the boys and to call her a women is to risk decapitation, even her Father calls her his only son and a real chip of the old block, this should trouble everyone who reads this.
Page Written By: Shadow Writer

This is dedicated to all the warriors of the shadows who have fallen in the line of duty. RIP    Crazy Glue: Killed in the Jackals Lantern by an unknown assailant, Her Murder is still under investigation by SPD  Wallace: HRM member killed in the Scottish invasion of England. Rot in Hell Wallace  Tommy: Member of the Regulators recently killed by SPD    Grimm: Member and Leader of the now defunct Ministry, killed by SPD C-SWAT. During the Deaths Hand Invasion  Mr. Walter O'Neil (Sarge): Member of a group only referenced to as the Post Office, He was killed in … END_OF_DOCUMENT_TOKEN_TO_BE_REPLACED