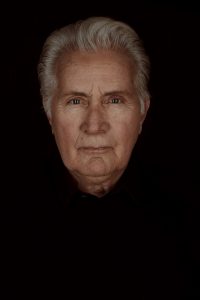 What do know about the Sandman……well a whole hell of allot, this man has been around for some time and even through the negative press he seems to come out on top. He is the brother of HRM leader Forrest Churchill, the father of Valkyrie Summer Churchill, and uncle to Edward Churchill and Jeffery Churchill; not to mention the adopted uncle of Nicolas O’Donnell and mentor to many within the underworld and intelligence world. Robert here originally hails from Dublin and has been all over the world hunting down those deemed guilty within the world of the spooks. As of the return to the sixth world he has been hunting down and exterminating the elven plague  for the Human Resistance Movement and quite successfully I may add.

Sandman here is one of the HRM’s top assassins as well one of their newest members among the leadership chain, it is rumoured that he is now in command of his own personal shadow guard known as Voorhees. Now thats something to fear unto itself seeing Voorhees is one of the HRM’s top removers of problems and part of the Dogs of War, than add Sandman and you have a marriage made in hell….more on Voorhees later. Sandman himself is a real treasure and one of my favourites from the Kingsmen hopefully they make a new action figure soon. I have already stated he has been all over he world yet he always finds himself within he UCAS and UK as he serves the Harbour Masters, Colonists and US Elite while taking a break from being the savoir of the free world from the elven menace.

Robert here is also a Crystal Dragon and one of there ranking members, well I didn’t see that coming….though I bet he is agile and his enemies fear that diamond tipped power drill he loves so much……also their is always Voorhees to contend with. I will leave a bit of his past to mystery as I don’t want to spoil his image, though this man has been dedicated to freeing Ireland from day one and was more than willing to join forces with the HRM and help forge the Belfast Ghosts to help police and eradicate the elven guards and lords within the territory. Does this mean Sandman works for Prince (King) Grimm…..nope Price Grimm works for the Sandman and this people is an irony seeing Robert is not nor cares to be a noble and a Prince works for him.

Now onto the Sandman and his career, now I know I am a fan of this agent of the shadows and I will try to be as non biased as I can but that will be hard; seeing I believe in his cause and the free people of Ireland. When he emerged onto the scene is unclear…..damn it I should have downloaded that file the other day; for further updates on Sandman. Okay sorry easily distracted I am, from what we know is that he is an FIP veteran and has been serving the worlds military ever since his days in the First World War, though I have reports here that state he is even older than 1915……I mean I am talking about 1600’s and one of the first Europeans to set foot in the New World, build a home and form relationships with the local native population within what would become the Common Wealth. Robert here worked as a sailor for the Royal Navy and eventually going privateer.

The rumours state that as a privateer captain he would stumble on the greatest prize of all the mythical fountain of youth, learned the secrets of the water, took a drink and bottled some up for his buddies back home. Captain Churchill would than butcher his men prior to making land and toss the bodies over to keep his secret find well…….a secret, and from there he would charter a course across the pond to what would become America and settle down within the New World and eventually take up arms against the Tyrant King George III. Now if this is true wow….just wow, he must have seen allot during his days, and yet he still chooses to take up arms in defence of yo and I. According to these records he was engaged in many defences of the native people as well defending the colonists from themselves, the Sandman would simply help teach the skills needed and as well terrorise them to there core with his signature kill and gift. A simple slice of the throat, and a little satchel of sand left behind to keep them scared and fearing the wrath of god.

It is said that the little nighttime prayer said by all Christians was started out of fear of the Sandman that would come to drag them down to hell. Well even I learned that little prayer and was told to hold my pillow tight and beware of the sandman…..never thought the two would be connected, well now I am little scared seeing these reports come from official Kingsmen Documents. Sandman even while across the pond was still working for the Kingsmen and basically helping keep the order within the colonies…..till he couldn’t take it any longer.

According to the paperwork here he aided within the French and Indian War, was part of the original Sons of Liberty and helped bring down the Red Coats one resting solider at a time. Though he was also involved in many of the famous battles and helped form the original guerrilla warfare strategy that pushed the colonists to a clear advantage against their more traditionally and formally trained opponents………………………………………………………………….BLACK DEATH

This is dedicated to all the warriors of the shadows who have fallen in the line of duty. RIP    Crazy Glue: Killed in the Jackals Lantern by an unknown assailant, Her Murder is still under investigation by SPD  Wallace: HRM member killed in the Scottish invasion of England. Rot in Hell Wallace  Tommy: Member of the Regulators recently killed by SPD    Grimm: Member and Leader of the now defunct Ministry, killed by SPD C-SWAT. During the Deaths Hand Invasion  Mr. Walter O'Neil (Sarge): Member of a group only referenced to as the Post Office, He was killed in … END_OF_DOCUMENT_TOKEN_TO_BE_REPLACED