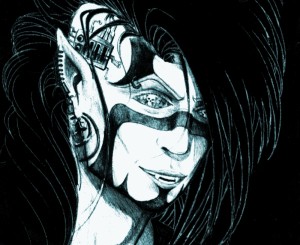 Bio: Shifter is a rogue elf who has turned his back on his Nog heritage. He was sickened by what his fellow Elves were doing in both of the Elven nations. He was born in New York and quickly took to the art of decking. He claims that he was inspired by the workings of decking legends Switch Doctor and Misfit, even going as far to be trained in computer espionage by the Misfit himself.

Shifter made a name for himself when he cracked the NYC color coded pass keys and created havoc in the city as the tunnels and bridges where again open to all. Granted this didn’t last long, but it made Shifter very unpopular with Lone Star and forced him to have to pack up and move to a fresh city. He entered Seattle in the early 2050’s through his kinship with other deckers. Work was easy to come by as information is always for sale and a good decker is hard to find.
Shifter was the first runner approached by James O’Brian during the broken arrow and the rest is history. Shifter swore his loyalties to the UCAS and became the sole decker for US1. With Shifter’s help he tracked down the other’s to be recruited for this team. In the years since, Shifter keeps an eye on the comings and goings of the Matrix of  Seattle and has assisted Lone Star and now Seattle PD with their computer crimes division. Nothing worse than a decker who turns on his own kind. Guess the Government pay is decent.

This is dedicated to all the warriors of the shadows who have fallen in the line of duty. RIP    Crazy Glue: Killed in the Jackals Lantern by an unknown assailant, Her Murder is still under investigation by SPD  Wallace: HRM member killed in the Scottish invasion of England. Rot in Hell Wallace  Tommy: Member of the Regulators recently killed by SPD    Grimm: Member and Leader of the now defunct Ministry, killed by SPD C-SWAT. During the Deaths Hand Invasion  Mr. Walter O'Neil (Sarge): Member of a group only referenced to as the Post Office, He was killed in … END_OF_DOCUMENT_TOKEN_TO_BE_REPLACED