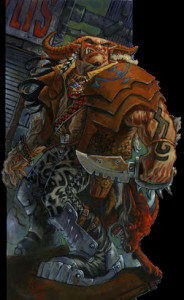 Weight: 400
Apparent Age: ??
Archetype: Physical Adept: Circle: 20
Preferred Weapon: Pole Arm
Runner Song:
Bio: Smash is a member of Urban Strike One, he is one of there most fierce combatants and with such he is used to elevate any threat to national security. Smash carries a meat tenderizer in pole arm size and he is extremely skilled with said weapon. Being a Troll Smash is basically good at one thing and he does it well and that is fight, so don’t expect any mercy from Smash in combat. Any information on Smashes activities are highly classified and hence I have nothing to report on this Troll. So do yourself a favour, he is a government agent and not a runner. Smash is very lethal and deadly as a physical adept his training is almost exclusively in martial combat and physical prowess. Smash does run a training academy for fellow adepts in Seattle called the “American Crush” leave it to a troll to be creative. Smash will sometimes be there when he is not on a mission. If your looking for training seek out the academy and if you have the credits you might even be allowed into the back room.

This is dedicated to all the warriors of the shadows who have fallen in the line of duty. RIP    Crazy Glue: Killed in the Jackals Lantern by an unknown assailant, Her Murder is still under investigation by SPD  Wallace: HRM member killed in the Scottish invasion of England. Rot in Hell Wallace  Tommy: Member of the Regulators recently killed by SPD    Grimm: Member and Leader of the now defunct Ministry, killed by SPD C-SWAT. During the Deaths Hand Invasion  Mr. Walter O'Neil (Sarge): Member of a group only referenced to as the Post Office, He was killed in … END_OF_DOCUMENT_TOKEN_TO_BE_REPLACED