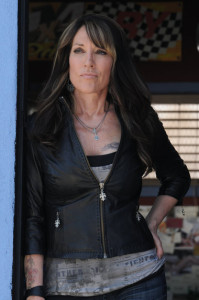 Bio: This runner is one tough bitch, she grew up in the back streets of Dallas and was born into a rough world of gangs, guns and violence. Sydney never had it easy and was forced to work and fight for everything she has. She is not a founder only cause she never worked in Seattle during those early days though that doesn’t mean she wasn’t working else where. Sydney was operating as Edward Davis’s go to problem solver and fighting hard to defend to Confederacy and her home state of Texas from invasion. This is how she meet her now husband Arthur Crane aka Stamps, they where fighting side by side within the Texas Elite against the Aztlan invasion and scary as it is, the two where fighting back to back and amongst all the killing and blood shed, they formed a bond that was unbreakable. The two of them after a night of battle became a couple and while still covered in gun powder, mud, blood and torn synthetic flesh they were married by Gary Robertson, and they have been husband and wife ever since those very early days back in 2022.

This didn’t slow them down on bit and they were not normal couple and settling down, Stamps went off to Seattle and Sydney stayed back in Texas to keep fighting the Aztlan and NAN soldiers trying to stake more of a claim of Texas. She has proven her worth through the years as a warrior and defender of Texas. Her relationship with Stamps is nothing normal this couple see’s each other every so many years for a night of reconnection and then it’s back to their busy schedules of fighting.
Sydney is one tough warrior, she is packed full of the same type of cyberware and bio implants her husband has and is basically the female equivalent of Stamps and if thats not scary enough they have a daughter named Ruby that somehow managed to have a magical spark and survive having two mean as rattler street samurai’s as parents. Sydney has been fighting for decades and was trained in the arts of being a hive buster by her husband and has been keeping Dallas and many of the Texas cities clear of the bug infestations, she even joined he husband for a decade while he was working in Bug City, she called Bug City there long over do honeymoon.
Well according to my investigators Stamps has reached out to his wife and asked for her to join him in Seattle, and it seems she has accepted since reports have come in of Sydney being in the Emerald City. It looks like the dysfunctional Crane family has decided to take up roots here in Seattle and I am not sure how comfortable that makes me feel. As Sydney agreed to come to Seattle do to being bored in Texas and wanted something more, she was pardoned by the Mayor do to Stamps actions during the war and there are talks of Sydney joining the Seattle Police Department but this is just a scary rumour.
She is one hell of a street killer and seems to be unbreakable, unstoppable and unrelenting like her mate. She also seems to have the same or similar paranormal abilities of Stamps and is immune to all non beneficial magic, Sydney has sent everyone who ever went against her to an early grave or running in complete panic and terror. There are hardened soldiers that are now nothing but a shell of themselves after engaging her, they now tremble in terror at just the mention of her name.
Though back to the rumour of her being part of Seattle Police Department is true, I was just updated while writing this article about her being placed as Captain Arthur Cranes partner within the Homicide Division. So my worst feat has come true, the Cranes are partners and both licensed to kill, God help us all, I can’t wait till those two bore of Seattle and return to Texas.
Page Written By: Shadow Writer

This is dedicated to all the warriors of the shadows who have fallen in the line of duty. RIP    Crazy Glue: Killed in the Jackals Lantern by an unknown assailant, Her Murder is still under investigation by SPD  Wallace: HRM member killed in the Scottish invasion of England. Rot in Hell Wallace  Tommy: Member of the Regulators recently killed by SPD    Grimm: Member and Leader of the now defunct Ministry, killed by SPD C-SWAT. During the Deaths Hand Invasion  Mr. Walter O'Neil (Sarge): Member of a group only referenced to as the Post Office, He was killed in … END_OF_DOCUMENT_TOKEN_TO_BE_REPLACED