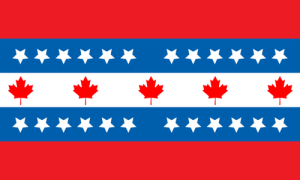 There has been a lot of talk about the False Flag and what it has become, so much so that we in the Sons of Liberty felt that is was about time that we brought it to the attention of the people. The False Flag is the flag that flies over the now United Canadian American States (UCAS) now in practice the UCAS is not all bad, though it’s citizens have been blinded from the truth. Though sadly the inception of the UCAS and the rise of the false flag has a very bloody and violent legacy behind it and those in power have used fear and manipulation to garner control to rape the citizens of any form of liberty and freedom. The False Flag is nothing more then a regime of power brokers made up from the blue blooded family’s, politicians, corporate leaders and the chosen few of the military.

The take over of the country has been in progress since the original Vietnam conflict, the people just sat back and allowed the government to slowly steal and imprison them. As the years went by the crushing grip of the False Flag was becoming far more obvious and the people were growing suspicious of the inception of this New World Order and how big their government had become, and with this corruption ran rampant through the hallowed halls of Washington DC and anyone who posed a threat to the lawmakers and the power brokers would suddenly up and vanish. Sadly the government needed an event so tragic that it would scar the face of the country and create fear and make the people feel powerless. This tragedy now left up for debate, though if you look beyond the writing on the walls you can not deny the truth. This event was the tragedy that befell our great nation on September 11th 2001, as the towers came down the people of this nation where torn between a cry for revenge and the fear coursed through their veins. This fear is what our leaders needed to bring forth the first stage in there plan of what would eventually become the False Flag and a full and complete takeover of the country and stripping us of our rights and dignity.

From the ashes of this tragedy rose the first of many government acts to succour or protection from any further attack and the cost of our personal liberties, well my people once you hand over your liberty over to the government you can never get it back and it’s lost forever. As the leaders signed this order our founders where rolling over in their graves, for everything they warned us about was becoming a reality and the people were to blind with a false sense of patriotism that they where unable to see the dangers in what was to become. Over the next handful of years the nation was plundered with additional guidelines under the guise of protection and more and more of your liberties where being stripped from each and everyone of America’s citizens and the people just applauded and allowed this travesty to occur.

As the years went by the nation was torn asunder by the awaking, goblinization, the nights of rage, the great ghost dance, the nights of blood and so on. sadly citizens a vast majority of these events where actually planed and part of the grand scheme to fully cement the False Flag in place and the people would demand even more protection from their leaders and the government would be right there with the security blanket to make everything all right again. The events I am speaking about citizens are the Great Ghost Dance and the Nights of Blood that followed there after, the events of the Ghost Dance accord shortly after the awaking and as the magic returned so did the White Buffalo and this signalled to the natives that it was time to start the fabled dance and with it would begin one of the worst tragedies to ever occur on American soil in the history of our nation. Our leaders have scoffed at the notion that they had foreknowledge of this event transpiring, this we have come to learn is nothing more then a lie and our leaders not only knew about the attack; they where prepared to capitalize on it.

If we have learned anything from history it is that people in power will do anything to stay in power and this tragedy was all they needed to place the final nail in the coffin of the American people and hoist the False Flag into place. There was only one issue they had and that was a vast majority of the soldiers, officers, media and politicians would never allow this to occur and needed to be removed, to make way for the ones that would play ball. This is where the events that transpired in Korea and Vietnam became surmount they needed to discredit the current military as nothing more then murderers and traitors, they needed to remove ambassadors that had enough political pull to discredit the politicians in Washington DC and they needed to silence key members of the national media that would not just fall in line. They as well needed to remove certain senators and congressman who actually believed in liberty, and democracy.

This might seem far fetched and how could our leaders conceive and execute such a dastardly plan, how could the people be so blind as to allow this to occur. Well citizens the answer is the Great Ghost Dance and the following Nights of Blood, in August of 2017 the nation was hit with a magical attack that shook our great nation to it’s core, do to the power of the attack fault lines shook and volcanoes erupted, the mystical energy tore across the nation and the spirit’s of the long dead native warriors returned from the great beyond and sought vengeance upon the people of non native decent or those that where not wearing a ceremonial band around their neck or a pin that was affixed to there clothing. In mere minutes over half a million Americans lay dead and countless more seriously injured and in dire need of medical attention. Our government knew the people would be crying for help and scared to their core since magic was new and this was the first time any one currently alive would have ever seen an attack of this calibre. Our leaders used this attack to send out their hit squads to hunt and silence those that they needed removed, they used this to silence the media and they would pray upon the fear that rested in everyone’s heart to grab complete control over the nation. As countless more lives where being lost to the government hit squads, the natives upped the anti again and began attacking in droves many of America’s great cities, towns and communities. So began the nights of blood and as the causalities rose and the citizens of the nation where being butchered in their homes and on the streets, the power brokers of the False Flag gave orders to the many military commanders to stand down and seal their bases off from the public. They where forbidden to offer aid or sanctuary for the fleeing, frightened and injured citizens; seeing that a vast majority of the militarises commanders where either part of the False Flag or nothing more then a servant of the False Flag they jut complied and fell in line. Thus totally destroying the trust the people had left in the United States Military, and for those military leaders that didn’t comply they were quickly silenced and dishonoured.

This citizens is how the final nail was driven into the coffin of the old America and Old Glory would become nothing but a memory for many of us that survived those days and for the rest of you history as you know it would be rewritten and the Old America would be nothing but a figment and erased from history. Our leaders have used your fear to enslave you and with the signing of the Treaty of Denver the United Canadian American States would rise and the False Flag would be forever cemented in place. The power players of the False Flag have taken there place in history and have slowly been stripping each and everyone of you of your freedom, your being regulated in every aspect of your life and even the food you eat is under their control. They claim a resource crisis and we must all just fall in line, Well my citizens this resource crisis is another lie that has been propagated on each and everyone of you. The Native American Nations are in control of a vast amount of the farmlands and they are in control of your food, even the fresh water you drink is regulated by the Native American Nations. The False Flag is aware of this and they allow it to occur in order to keep each and everyone of you compliant, they control what you eat, and what you drink they keep you week, they keep you in a permanent state of starvation in order to keep you compliant.

This my people is the False Flag, the UCAS is nothing more then a conglomeration of nations under one banner, they are the ones who have enslaved you, they are the ones who propagated the slaughter of countless citizens during those trying days, they are the ones spreading the lies to keep you complacent. The False Flag is nothing more than a tactic to continue to rape and control each and everyone of us, the New World Order has drawn first blood people and they are now keeping you enslaved under the banner of false freedom. We in the Sons of Liberty (Freedom Patriots) are fighting to bring down the False Flag once and for all, we are fighting to restore freedom, democracy and liberty to each and everyone of you. We can’t do this on our own, we need you the people to rise up, we need you the people to see the forest for the trees and stand united against a great evil, we need the people to say enough is enough and stand as one united against the False Flag. The truth is all around you, just open your eyes and the truth will be reviled my citizens. Only you are keeping yourself complacent and this complacency has given the agents of the False Flag the power to enslave you, are you a American or are you a Slave. Rise up my Americans, Rise up and tear down the chains that bind you and tear down the False Flag once and for all.

This is dedicated to all the warriors of the shadows who have fallen in the line of duty. RIP    Crazy Glue: Killed in the Jackals Lantern by an unknown assailant, Her Murder is still under investigation by SPD  Wallace: HRM member killed in the Scottish invasion of England. Rot in Hell Wallace  Tommy: Member of the Regulators recently killed by SPD    Grimm: Member and Leader of the now defunct Ministry, killed by SPD C-SWAT. During the Deaths Hand Invasion  Mr. Walter O'Neil (Sarge): Member of a group only referenced to as the Post Office, He was killed in … END_OF_DOCUMENT_TOKEN_TO_BE_REPLACED