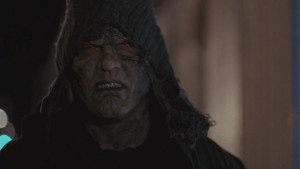 Wishmaster is nothing more then a legend of the squad, he is horrifically deformed and demented hermetic magi, who has developed some very sinister spells and fancies himself a Djinn. Wishmaster has never been seen to wield a weapon other then magic so this is dangerous killer, He also seems to have some ability to grant wishes, though this is just a rumour and like a djinn he will twist your words, even a lawyer would be hard pressed to not be out witted by the Wishmaster. He is extremely loyal to his squad and seems to only take direction from Tobias (Jigsaw) or Candyman, this reporter is not sure why he is sent out but he is always with another member of the squad so if you see the Wishmaster your probably already dead.

No magi has been able to identify what foci or what circle he is, assume the worst and just avoid.

This is dedicated to all the warriors of the shadows who have fallen in the line of duty. RIP    Crazy Glue: Killed in the Jackals Lantern by an unknown assailant, Her Murder is still under investigation by SPD  Wallace: HRM member killed in the Scottish invasion of England. Rot in Hell Wallace  Tommy: Member of the Regulators recently killed by SPD    Grimm: Member and Leader of the now defunct Ministry, killed by SPD C-SWAT. During the Deaths Hand Invasion  Mr. Walter O'Neil (Sarge): Member of a group only referenced to as the Post Office, He was killed in … END_OF_DOCUMENT_TOKEN_TO_BE_REPLACED