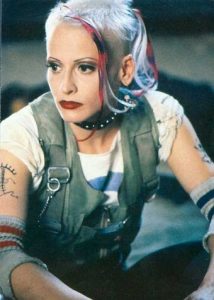 Bio: Well this is a new kid on the streets and she picked a bad time to step off the bus and enter the shadows of Seattle, Stardust is fresh from Las Vegas were she wielded her magic as a street performer to make a few extra nuyen from the tourists. She was growing weary of the day to day grind of street magic and dreamt of more, she dreamt of hitting it big and being able to retire in the lapse of luxury. For a girl from the back streets of Vegas this dream would never be achievable unless she sold her body as a whore working for the Warden or the Puppetmaster and her pride wouldn’t let her lower herself to those levels. She wanted more then being a street whore, she wanted the glitz and glamour of being a runner.
This Stardust dreamt of nightly as she worked her magic for the tourists, she would see there escapades and adventures play out on the trideo, the movies and theatres. She would study the works of the legends and read the novels that to her where scripture, then one faithful day Stardust just packed up her stuff into a suitcase, boarded a bus bound for Seattle and entered the world she so dreamed of.
Stardust arrived in Seattle’s Bus Terminal A in the suburban zone just hours before the war, and by the time she checked into a motel and was sitting eating her synthetic pizza watching a movie. The war had erupted and Stardust was unaware that the fate of the city was being decided as she watched one of her favourite runner flicks, Stardust fell asleep to the sounds of war erupting all around her, being from Vegas she was used to gunfire and explosions so she thought nothing of it till morning when she awoke to the announcement of victory.
She listened to the reports and she decided to stand with Seattle, since being a Vegas girl she could understand their plight and figures the war will mean more work for her and more work means more chances to live the dream. she has yet to make an impact in the shadows of Seattle so I have very little I can report on her and her activities.
Page Written By: Shadow Writer

This is dedicated to all the warriors of the shadows who have fallen in the line of duty. RIP    Crazy Glue: Killed in the Jackals Lantern by an unknown assailant, Her Murder is still under investigation by SPD  Wallace: HRM member killed in the Scottish invasion of England. Rot in Hell Wallace  Tommy: Member of the Regulators recently killed by SPD    Grimm: Member and Leader of the now defunct Ministry, killed by SPD C-SWAT. During the Deaths Hand Invasion  Mr. Walter O'Neil (Sarge): Member of a group only referenced to as the Post Office, He was killed in … END_OF_DOCUMENT_TOKEN_TO_BE_REPLACED