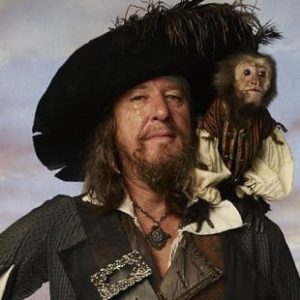 Bio: Maelstrom well where to start about this ruthless cut throat pirate, and yes I mean Pirate. This man crews a ship of the damned this ship is called the Tempest and it sails the seven seas and ravages any and all other vessels it engages. His men are few in number but they have sunk and commandeered vessels with ten times or more the crew and guns. Maelstrom just doesn’t care and I am not even sure how he does it, his ship looks like a old wooden ship from the seventeenth century with black tattered sails and old cannons.
This ship is the most feared in the seas and even Navy Admirals say a silent prayer when the fog rolls in and winds die down that the Tempest doesn’t emerge from the mists. I would say this ship was just a ghost story, but I saw it with my own two eyes and witnessed as the crew disembarked for shore leave, let me tell you it was the scariest shit I have even seen. These men mean business and live to old code of the Pirate. So do your self a favour if you see the Tempest or this Captain avoid, avoid, avoid and you might live a long life.
Update: I Have recently found out the tempest is flying the banner of the Crimson Bloods, it looks like the Governor has struck a accord with this bloody pirate lord. Well I guess it takes a Pirate Lord to strike a deal with another. All I can say is the most feared ship and captain has now aligned himself with the most feared Pirate Clan, this can’t be a good thing and only time will tell what this unholy alliance will garner. Be warned my seafaring readers, there be Pirates in those waters.

This is dedicated to all the warriors of the shadows who have fallen in the line of duty. RIP    Crazy Glue: Killed in the Jackals Lantern by an unknown assailant, Her Murder is still under investigation by SPD  Wallace: HRM member killed in the Scottish invasion of England. Rot in Hell Wallace  Tommy: Member of the Regulators recently killed by SPD    Grimm: Member and Leader of the now defunct Ministry, killed by SPD C-SWAT. During the Deaths Hand Invasion  Mr. Walter O'Neil (Sarge): Member of a group only referenced to as the Post Office, He was killed in … END_OF_DOCUMENT_TOKEN_TO_BE_REPLACED