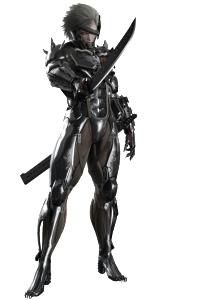 Bio:   Jack was born on a rainy day in Liberia. During his youth, in the turbulent, civil war torn areas of Liberia, Jack was adopted by a Warlord by the name of Solidus after seeing the potential in Jack, who became his godfather after he killed the former’s parents. Jack was subsequently raised as a child soldier and later fought on the forefront with many other child soldiers. He and other children were shown Hollywood action films daily for “image training,” and were given food mixed with gunpowder containing toluene to make them more controllable. On several occasions, Jack and several other “promising” child soldiers were injected with an unknown substance during a physician’s experiment. On another, Jack witnessed Solidus demonstrate to him that blades were a “noble weapon” compared to guns, by slitting another soldier’s throat for insubordination in front of him as a lesson. Under Solidus, Jack became a killing machine, garnering the name “Jack the Ripper” by allied and enemy alike due to his incredibly high kill rate compared to the other other boys his age, as well as a reference to his being one of the few english Caucasians born in Liberia. Armed with a gun at the age of six, he would later remember it as an AK rifle, as well as a knife, he proved to be a superior soldier, rising to become captain of the child squad codenamed “Foxhound” at ten. His skills with a bladed weapon, as well as his cruelty in dispatching enemies with them, was another reason for his comparison to the legends of “Jack the Ripper” from old London tales.

After Solidus had won his war, Solidus had Jack and his squad, now thirteen years old, placed in a relief center with several of his own men assigned to keep tabs on the soldier prodigee, although the relief center was reluctant to put the latter into a foster family because they feared he would be too much trouble for the family. Eventually, without Solidus’ knowledge, he was later removed by an unknown non-governmental organization and taken to an unknown facility somewhere in South Africa. Jack and other surviving members of Foxhound then underwent extensive amounts of counseling before becoming at least outwardly stable. There, Jack and the remaining members of his squad were implanted with, at the time, experimental bio and cyberware as well as lacing Jack with nanomachines, in order to have them function as a super soldier shock unit. “The Order”, as Jack and his others had come to know it as, chose him out of the others in his unit because unlike the others, who would live up to their pasts and pay dearly for it, Jack did not accept his past and hated it.The same nanomachines were also capable of memory manipulation by connecting or stimulating synapses, primarily nerve sections in the dormant part of the brain.

“The Order” would quickly put the now upgraded Foxhound unit through intense and rigorous training from learning the limits of their augmented systems to infiltration and combat training. All the while using the nanomachines to alter Jack’s mind and memories to suppress what was left of his genteel side and become the perfect killing machine. After several years of intense training and molding, Foxhound was prepared and and dispatched on their first official mission, to rapidly respond to the sudden incursion by the organization know as “The Death’s Hand” into the African nations. Being a smaller unit, Foxhound moved to delay and disrupt the supply routes behind the main forces, being quite successful at first. Their augmented skills and training allowing them to slip behind in and out of enemy camps and convoys with little to no evidence of their presence. But over time casualties began to appear within their small seven man unit, with their tactician “Solis” being the first to fall. With their information and tactics expert gone the lightning strike raids became just sloppy enough to where the death toll became worse, with their Sniper “Venom” and heavy weapons expert “Vulcan” getting caught while creating an escape route for the others knowing they were already cut off from any form of retreat themselves. “Ocelot”, their small arms specialist, and “Psycho Mantis”, their only magical support, falling when cut off mid-raid by unknown vehicle reinforcements. Even with Ocelot rapidly mulching the grunts and Psycho Mantis unleashing the full might of his maical arsenal, they were shredded in the ensuing crossfire taking most of the base down with them. Leaving Jack and “Grey Fox” on the run from the pursuing forces for many days and nights, barely staying one step ahead of the invading Death’s Hand forces.

With few moves left to the last remaining Foxhound members, Jack took a large gamble and moved towards the last place he could remember from his destroyed memories, Liberia and the base of Solidus, his once leader and father figure. The two slipping inside the now small fortress without spilling a drop of blood and found Solidus in his war room, organizing the last lines of defense against the Death’s Hand. Surprised at seeing Jack alive and well on the run, showing the first bit of emotion his men and Jack had seen embracing Jack and Grey Fox. Explaining the situation as best they could, Solidus agreed to aid them in escaping Africa by sea, as the last act of personal redemption for what Solidus had made them become.rearming and resting at the fortified base.

The two being awoke in the early hours of the morning as the base came under assault by the Death’s Hand forces. Grabbing their equipment, they met Solidus in the vehicle bay and the three made for the coastline where the last of Solidus’s small battered navy stood. Arriving just ahead of the forces on their heels they prepped their boat for launch only to come face to face with two of the Death’s Hand elite  “cleanup” crew. Grey Fox and Solidus drew their blades, Solidus ordering Jack to go and live the life he had stolen from him at such a young age. The two Stood their ground and held the Death’s Hand elite at bay just long enough for the ship to launch and break free before being cut down in a clash of steel.

Reflecting on the sacrifice made by the last two men he knew and trusted, Jack would eventually arrive inside the CAS around northern Florida. Thanking the boat’s crew an making his way into the countryside. Slowly making his way through mid and southern states, taking what jobs he could and ending the lives of many more men deserving or otherwise. Hearing of the assault against Seattle by the combined weight of the UCAS and NAN drawing him there with renewed purpose. Seeing it as nothing more than what the Death’s Hand had done to his home country and vowing to do what he was unable to achieve there, peace and freedom. Using his infiltration and assassination skills, he cracked the UCAS/NAN barricade of the city downing as many officers he could safely execute as he went. Arriving in the city with little name for himself, he has set upon the barrens and low districts soldiers in true fashion to his namesake and saying, “ ‘Jack the Ripper’ is ready to let rip!”.

This is dedicated to all the warriors of the shadows who have fallen in the line of duty. RIP    Crazy Glue: Killed in the Jackals Lantern by an unknown assailant, Her Murder is still under investigation by SPD  Wallace: HRM member killed in the Scottish invasion of England. Rot in Hell Wallace  Tommy: Member of the Regulators recently killed by SPD    Grimm: Member and Leader of the now defunct Ministry, killed by SPD C-SWAT. During the Deaths Hand Invasion  Mr. Walter O'Neil (Sarge): Member of a group only referenced to as the Post Office, He was killed in … END_OF_DOCUMENT_TOKEN_TO_BE_REPLACED