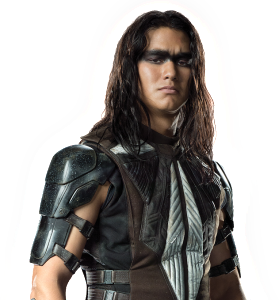 Bio: Ahh, Scalp Hunter. This young man is another Native that has abandoned his home Nation to run the mean Seattle streets. And what a time he chose to do it.    Since the Sioux Nation has all its citizens become standing Army soldiers for 3-4 years, it was quite easy to find info on this kid.

From his personal records, young John was born to a prominent family in the SN. His father and mother, both, being Shaman and his father on the Council by the records. He was eldest of four children, having two younger sisters (twins) and a younger brother. As well, he appears to have an uncle, on his mother’s side, in the Sioux Wildcats.He grew up in Butte, SN. I don’t have much on his life before his military service, but I do know he graduated High School (a requirement in the Sioux Nation for citizens and in his record). This young man booted in Cheyenne and, strangely, he serviced as a border guard for almost ten years. Maximum time for normal, non re-upped soldiers is only two years with two as a reservist. I also found records that his two sisters, both now in their early twenties, never served, and are not even IN the NAN any more. Sounds to me like either Daddy or Uncle got the girls a pass by making Scalp Hunter stay a guard, an easy job by the sounds of it. Sad, really, Nepotism being used to get cushy jobs for the kids. And diving in deeper, I found records that his brother, at 16,  is a conformed Shaman.

He has apparently been trying to find Wolf of the Devil’s Rejects. And by one of my contacts still left alive, he found him. Scalp Hunter was last seen speaking to Wolf on the street when the Rejects’ truck screeched up behind him and both disappeared. I really hope this young man is not going to be another statistic on the street, found in the gutter. He could have a bright future in the darkness if he lives long enough to start it.

This is dedicated to all the warriors of the shadows who have fallen in the line of duty. RIP    Crazy Glue: Killed in the Jackals Lantern by an unknown assailant, Her Murder is still under investigation by SPD  Wallace: HRM member killed in the Scottish invasion of England. Rot in Hell Wallace  Tommy: Member of the Regulators recently killed by SPD    Grimm: Member and Leader of the now defunct Ministry, killed by SPD C-SWAT. During the Deaths Hand Invasion  Mr. Walter O'Neil (Sarge): Member of a group only referenced to as the Post Office, He was killed in … END_OF_DOCUMENT_TOKEN_TO_BE_REPLACED