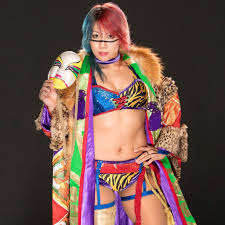 Bio: Sai has been confirmed to be the wife of Oliver McKeen Jamestown junior and as well close personal friend of the Gargoyle and part of the same Ninja clan; Legends state that if she removes her mask during a hunt you are not long for this world, though I have never seen her in action but from those that have they say she can slice a tank from multiple miles away and even her fists are as deadly as the Gargoyles and she can punch down aircraft just like her clan leader. No one is sure just how much Sai and Gargoyle have shared but assume most everything and these are two ninja’s that you need to avoid and seeing that Sai is married to a Jamestown and his moniker is that of a ninja from the old 20th century video game Mortal Kombat one can say that his wife has given hubby some training and one can assume that the Gargoyle has accepted Cyrax into the clan and considers the little shrimp to be family as well; this is scary shit seeing that Gargoyle is Wolf Pack does this mean that Sai is also Pack as well and where does the Pack stand with the Jamestowns….To many questions left here and I am already on the run for my life and will leave it here.

This is dedicated to all the warriors of the shadows who have fallen in the line of duty. RIP    Crazy Glue: Killed in the Jackals Lantern by an unknown assailant, Her Murder is still under investigation by SPD  Wallace: HRM member killed in the Scottish invasion of England. Rot in Hell Wallace  Tommy: Member of the Regulators recently killed by SPD    Grimm: Member and Leader of the now defunct Ministry, killed by SPD C-SWAT. During the Deaths Hand Invasion  Mr. Walter O'Neil (Sarge): Member of a group only referenced to as the Post Office, He was killed in … END_OF_DOCUMENT_TOKEN_TO_BE_REPLACED