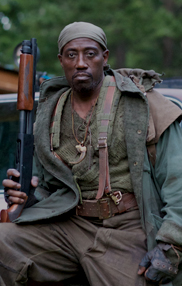 Bio: Mohawk, well this is final member of the Cowboys and he is no joke period, this man is a monster and kills for the sheer fun of killing, He loves to bring anarchy to any city he rides into. His beginnings can be traced back to Dallas, and he was part of the terrorist band know as the Sons of the Confederacy and being African American he had to really out do himself to prove his worth, to these southern racists and Mohawk did in spades. He lead the Good Old Texas First during the second Civil War and slaughtered many a UCAS solder and as well attacked the Aztlan boarder on a number of occasions. Once the war was over the Confederacy was done with Mohawk and tried to hang him I said tried as he escaped the noose and slaughtered his former brethren and took his rampage to the mean streets of Dallas and throughout the CAS, this is where he meet the rest of the Cowboys and formed an immediate bond and they have been as thick as thieves ever since.
Mohawk like the other Cowboys was captured, tried and convicted and sentenced to death by firing squad, see a pattern forming. He was executed and when sent to the morgue he awoke and well from what I read, the stupid CAS officials left Mohawk’s Assault Nemesis fully loaded in the Morgue and well he woke up grabbed his baby and opened fire on all in the room. He walked out of the morgue with a trail of bodies and would even gun down the ones who tried to run. This time when he left the morgue, his fellow brothers where waiting for him with his bike already running and every officer lying dead or dying on the ground. Mohawk just waded through there blood gave the boys the bro hug and fist pound mounted his bike and they rode of into the sunset. This escape was so profound that it sparked the Movie “The Bloody Trail” don’t believe the hype from Hollywood these boys are monsters and have no soul, I mean come on They were literally spit out of hell, and sent back to earth. The Fucking Devil, didn’t even want to deal with these killers and it seems that no one else does as well.
keep everything you have read in mind when it comes to the Cowboys, these events are all well documented and you can even find the videos of there executions in the matrix. There entire early rampage can be found on various sites and there are plenty of documentaries that have been made about these men, as well as many major blockbuster movies and made for television movies. Hollywood lies, people the Cowboys are not movie stars and they care not for fame and glory, they love there infamy and will end your life without thinking. These men have no home, and no regular income so they need to hijack, car jack, kidnap, rob, and murder to survive and this is all they know.

This is dedicated to all the warriors of the shadows who have fallen in the line of duty. RIP    Crazy Glue: Killed in the Jackals Lantern by an unknown assailant, Her Murder is still under investigation by SPD  Wallace: HRM member killed in the Scottish invasion of England. Rot in Hell Wallace  Tommy: Member of the Regulators recently killed by SPD    Grimm: Member and Leader of the now defunct Ministry, killed by SPD C-SWAT. During the Deaths Hand Invasion  Mr. Walter O'Neil (Sarge): Member of a group only referenced to as the Post Office, He was killed in … END_OF_DOCUMENT_TOKEN_TO_BE_REPLACED