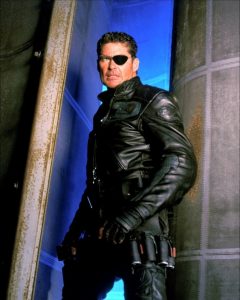 Bio: Well here is another piece of gutter trash the HRM swept up. Nick is a native of the Tir Na Nog and he just fits right in with the terrorists and considered them to be his brothers and sisters. Nick grew up in the poor district of Northern Ireland, probably somewhere in Belfast. he was just a poor human child among the elves and this is where his hatred began to boil. Nick started to wear an eye patch for cosmetic reasons to make himself feel tougher and all it did was make him look more like a fool. It is suspected that Nick is connected to the Dublin Massacre at the Elven School for the Gifted in 2065. This attack left a large majority of the students and faculty laying dead, this school was as well ground zero for the Elven Bio-Plague that killed thousands of elves worldwide before a vaccine was discovered in 2067. Elven authorities in the Nog and Scotland Yard believe this attack on the School was Nicks initiation into the HRM and when he became a full card caring member of this agency.
Nick is a trained Hermetic Magi and it is rumoured that he like Bitch received a large portion of his magical and combat training from John Ripley (the HRMs Commander) personally, but this is just a rumor. Nick is known to work  with fellow HRM members Neo, Sawyer, Mind Freak, and Locust, though his skill in combat might not be at the point of those monsters Nick is still not to be taken lightly. Nick is a trained HRM Operative and with such should be considered extremely dangerous so DO NOT TRY TO APPREHEND OR APPROACH on your own. Get to safety and contact Seattle Police Departments Major Case Division or Homeland Security Division.
Nick is often seen flanked by either Sawyer or Locust so he is to never be considered alone. He has been recently spotted working in Seattle with the Harbingers and has been seen working with fellow HRM members Trigger and Xavier in the Seattle outskirts near the Tir Tangier border. Nick used to work with Arwen and the two were as thick as thieves untill Arwen meet her demise. Hey Nick, I do hope one day soon you end up sharing a grave with Arwen you terrorist bastard.

This is dedicated to all the warriors of the shadows who have fallen in the line of duty. RIP    Crazy Glue: Killed in the Jackals Lantern by an unknown assailant, Her Murder is still under investigation by SPD  Wallace: HRM member killed in the Scottish invasion of England. Rot in Hell Wallace  Tommy: Member of the Regulators recently killed by SPD    Grimm: Member and Leader of the now defunct Ministry, killed by SPD C-SWAT. During the Deaths Hand Invasion  Mr. Walter O'Neil (Sarge): Member of a group only referenced to as the Post Office, He was killed in … END_OF_DOCUMENT_TOKEN_TO_BE_REPLACED