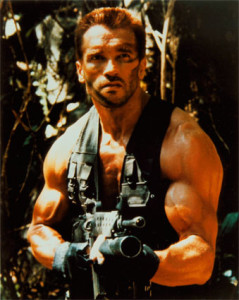 Weight: 250
Apparent Age: 40
Archetype: Street Samurai
Preferred Weapon: DAOD Assault Nemesis
Runner Song:
Bio: Well strike another bottom feeder of the list, the Commando has joined Urban Strike One and he will fit in perfect with the other crazed metal heads in that division. The Commando has served the UCAS for his entire adult life, and has been trained by the bet the UCAS has to offer, he was part of the Navy Seals prior to his joining Urban Strike, before the Seals he was with Force Recon. The Commando is in no way a nice man and he follows orders to the letter, and with the lunatic James O’Brian in command we will surly feel the wrath of the Commando on many occasions.
This soldier is basically a super solider, who has been loaded with state of the art cybernetics and bioware, he has been given the best weapons and armour and a total license to kill. Killing is this man’s speciality and preference seeing that he does not believe in the rules of engagement and civilians are nothing more then a meat shield and beneath him. The Commando is will be right at home with lunatics like Borg and Roach, the new Urban Strike Team is turning out to be ferocious one and the Commando is just another brick in the wall for the False Flag.
Page Written By: Shadow Writer

This is dedicated to all the warriors of the shadows who have fallen in the line of duty. RIP    Crazy Glue: Killed in the Jackals Lantern by an unknown assailant, Her Murder is still under investigation by SPD  Wallace: HRM member killed in the Scottish invasion of England. Rot in Hell Wallace  Tommy: Member of the Regulators recently killed by SPD    Grimm: Member and Leader of the now defunct Ministry, killed by SPD C-SWAT. During the Deaths Hand Invasion  Mr. Walter O'Neil (Sarge): Member of a group only referenced to as the Post Office, He was killed in … END_OF_DOCUMENT_TOKEN_TO_BE_REPLACED