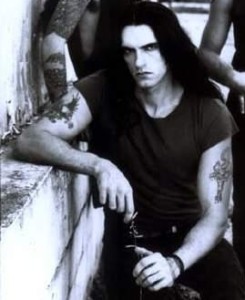 Weight: 225
Apparent Age: 30
Archetype: Physical Adept: Circle Unknown
Preferred Weapon: Claymore
Runner Song:
Bio: Voltaire is a German runner and he does hold a strong loyalty to the HRM and some say a card caring member of this cell. He has captured an old castle in the Black Forest region of Germany and restored it to its old Gothic glory, with paranormal creatures and all. Voltaire is less a runner now and more a king pin of the German underworld, During his running days he would work with the likes of Charon, Ripley, Safari, and even Jeeves so this man is all over the map. He basically was muscle with a brain and a dark smile, he played that Goth card and he played it well, this man made friends everywhere and eventually set up a serious network of killers, thieves, and smugglers to work for him and Voltaire became there king.
Once the HRM secured control over Germany, Voltaire was given absolute authority and freedom of movement through the nation. Since John knew Voltaire was an ally and his underworld connections were extremely valuable to him. This man might no longer take to the battlefield or run the shadows but make no mistake this Goth is a nightmare in combat and is on friendly terms with both Scrooge and Acme so don’t think the Hand didn’t already have a foot hold in Germany before the Negotiator, they did. All I can say is Voltaire almost never leaves his fortress and that;s fine, those woods are haunted and that Goth is at home with the Ghosts of the Dead.

This is dedicated to all the warriors of the shadows who have fallen in the line of duty. RIP    Crazy Glue: Killed in the Jackals Lantern by an unknown assailant, Her Murder is still under investigation by SPD  Wallace: HRM member killed in the Scottish invasion of England. Rot in Hell Wallace  Tommy: Member of the Regulators recently killed by SPD    Grimm: Member and Leader of the now defunct Ministry, killed by SPD C-SWAT. During the Deaths Hand Invasion  Mr. Walter O'Neil (Sarge): Member of a group only referenced to as the Post Office, He was killed in … END_OF_DOCUMENT_TOKEN_TO_BE_REPLACED