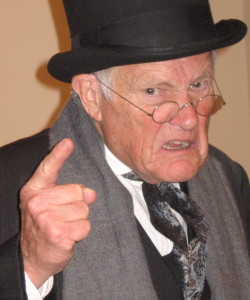 Bio: Well where to start on Scrooge, this man is originally from England and immigrated here in the early part of the 2020’s and set himself up with a business in the jewellery district and he quickly earned a very serious reputation as being a keen and shrill business man. He was the man to go to if you needed diamonds and other precious stones though his prices where always higher then others around him. His competitors always seemed to have misfortune when they tried to out price Scrooge. We have no proof but bad things would happen to his competitors family’s and stores like fire, assaults and worse. Well when the data crash happened Scrooge got wiped out like many business men of the time, though this man had his hands in a ton of gold, silver and diamonds as well as other precious metals and gems. His skills as a jeweller and appraiser made this man very valuable on the streets, though his zeroed SIN made it imposable for him to land a legitimate job, home, or move the millions in metals and stones he had on hand. So Scrooge did what he did best hoard, and for work he took to the shadows. This man like Mortician was forced onto the streets by the data crash and he excelled as a runner.
Scrooge, did jobs against the financial district and other diamond brokers, and this is where he had his first run in with the Deaths Hand in Africa, he would take regular trips to Africa through false documentation to the war zones to purchase large amounts of blood diamonds and smuggle them into the UCAS for a quick resale. He would in a moments notice flood the diamond market and cause a sever price drop, he would then buy up all the legitimate diamonds and like a dragon he would horde them, causing a sudden price jump, he would also sit and laugh as the federal agents would seize the blood diamonds. This would again cause the Diamond market to spike. Alexander of the Hand noticed what Scrooge was doing and made this man an offer he couldn’t refuse. Needless to say Scrooge accepted knowing that he really didn’t have a choice in the matter and he went to work for Acme.
Scrooge is rumoured to have had his greedy little hands in the Titanic Operation somehow, but this is speculation. He did though continue his smuggling operations and expand with Acmes’s help to further locations and began to hire the legendary Jeeves for his skills as a thief, and Jeeves would benefit from Scrooges fencing operation. We can thank Scrooge for the inflation of the precious metals prices, he basically controls the Diamond district in Seattle, New York, London, Richmond, Miami, and Berlin and with a single phone call can send the prices crashing down or sky rocketing.
Scrooge is a physical adept, we know this man has never killed anyone personally but that doesn’t mean he hasn’t ordered there execution and he works with Acme as the Hands Fence so don’t think he is non combative I have heard he can use that walking stick he carries very well and be warned under that frock coat is a nightstick that Scrooge is highly skilled with. He dresses as if it is the 1890’s or early 1900’s so he is very distinctive in his appearance. He is never alone and always travels with a few fellows and maybe even some Hand elite so be careful.

This is dedicated to all the warriors of the shadows who have fallen in the line of duty. RIP    Crazy Glue: Killed in the Jackals Lantern by an unknown assailant, Her Murder is still under investigation by SPD  Wallace: HRM member killed in the Scottish invasion of England. Rot in Hell Wallace  Tommy: Member of the Regulators recently killed by SPD    Grimm: Member and Leader of the now defunct Ministry, killed by SPD C-SWAT. During the Deaths Hand Invasion  Mr. Walter O'Neil (Sarge): Member of a group only referenced to as the Post Office, He was killed in … END_OF_DOCUMENT_TOKEN_TO_BE_REPLACED