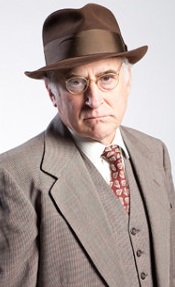 Bio: Stamps well this cop is a nightmare for any criminal, he is a bull dog and once on your trail he will not stop. Stamps has investigated some of the worst crimes to date. he has 100% conviction rate after he has arrested a suspect. He has sent more people to the gallows then anyone else. Well good for Seattle is that Stamps and his Partner Holmes worked in Bug City, bad for Seattle is that Stamps has taken the Mayors Pardon and come back to Seattle. Bug City cops, have to be the hardest, most dedicated, determined and hard headed bastards period. Bug City is not a nice place and Stamps chose to live there, yes I said chose to live there after he left Seattle in 2053. The normal lifespan of a Bug City resident is 10 years before the move or die. Stamps lived there for 20 years and only left to receive a pardon for his crimes.
Stamps before he was a cop, was a shadowrunner and not a nice one. He would do whatever jobs where available and since in those early days the jobs where normally violent, bloody and messy Stamps just fell right in with the others of the time. He started small dealing with gangs and organized crime families, eventually graduating to the bigger more legendary jobs. Like the sewer city clean out, the hive buster, and judicial mishap. Stamps favourite work was terminating bug shamans and toxic shamans. He being mundane. though he is very skilled in cleaning out spirits and I am still insure of how. He was the go to man for any Johnson who needed an area clear of these pests. Stamps would work with fellow original Ringmaster on a number of occasions and he was there for the fire and ice job and the Titanic operation.
Stamps like the others of his time had a pile of bodies to his credit and I really don;t think he ever thought about all the lives he ruined while he was running the shadows. I don’t even think he even cares today. For a man so bent on justice, he sure denied all those families justice by accepting a pardon Stamps should be on the gallows pole, not carrying a badge. Though this is my opinion, Stamps and his partner Holmes are both Bull Dogs and since he returned Stamps has not missed a chance to bust a criminal. Do yourself a favour stay out of his way, you do not want to be a suspect in one of his cases, he will not stop and will break anyone who sits across from him in interrogation. Stamps is a serious threat in combat and is no joke at all, if you want to commit suicide by cop, open fire on this man. He has already shrugged of a sniper shot to the head. Folks we have another Mikey here Stamps is to be avoided at all costs. I have reports from one man who sat before him in the interrogation room and he couldn’t look Stamps in the eyes, and Stamps had him singing like a choir boy in no time. He is refereed to as one scary mother fucker sorry for the profanity. but just reporting the facts here.

This is dedicated to all the warriors of the shadows who have fallen in the line of duty. RIP    Crazy Glue: Killed in the Jackals Lantern by an unknown assailant, Her Murder is still under investigation by SPD  Wallace: HRM member killed in the Scottish invasion of England. Rot in Hell Wallace  Tommy: Member of the Regulators recently killed by SPD    Grimm: Member and Leader of the now defunct Ministry, killed by SPD C-SWAT. During the Deaths Hand Invasion  Mr. Walter O'Neil (Sarge): Member of a group only referenced to as the Post Office, He was killed in … END_OF_DOCUMENT_TOKEN_TO_BE_REPLACED